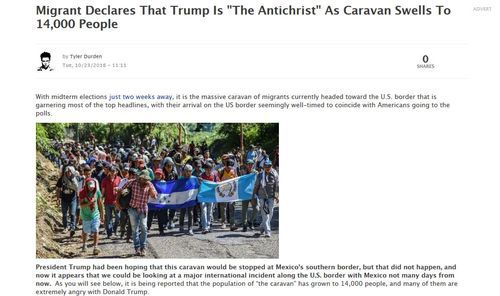 Politically, are you an optimist or a pessimist?

The year is 2050 and the USA is a NATION in a REAL and MEANINGFUL sense, and it doesn't suck.

Can you backwards engineer a plausible narrative leading up to that scenario?

Hello everyone, welcome to Radio VDARE and I’m your host Virginia Dare. As you know, a so-called “caravan” of Central Americans has hit our southern border. Well, “caravan” is a bad phrase. It looks more like a column of an invading army, with almost 14,000 people according to some estimates. One wonders why we even have a military if we are utterly powerless to protect our border.

Still, the bigger question is why we are told we must let these migrants in. They are actually “refugees,” we are informed. Of course, the same reporters saying this are actually interviewing the migrants, and the migrants themselves are saying they are coming for jobs and material gain. [Caravan migrants: “What Are We Supposed To Do In Honduras If There’s No Work?” by John Binder, Breitbart, October 22, 2018] This means we have no obligation to let them in. Unfortunately, the migrants themselves know how to game the system and so-called mainstream media reporters are enabling them. The invaders are also being coached by left-wing lawyers. [DHS Spox: If you say the magic words, ‘I’m scared,’ we let you into America, by Robert Kraychik, Breitbart, October 22, 2018]

What is truly incredible is how there is no discussion of what these migrants contribute to this country. Indeed, it’s seemingly because they are poor and will likely be a welfare drain that we are supposed to let them in. There’s no evidence they even want to be American. Despite being “refugees,” they apparently have money to buy Honduran flags from organizers that they wave during their march of conquest. Migrants also have no problem giving interviews to reporters calling President Donald Trump the “Anti-Christ” and saying that he is going to hell [Migrant Declares That Trump Is “The Antichrist” As Caravan Swells To 14,000 People, by Tyler Durden, Zero Hedge, October 23, 2018]. Honduran protesters expressing solidarity with the migrants have also burned tires and American flags in front of our embassy [Why caravan migrants wave Honduran flags and burn tires in front of U.S. embassy, by Monica Showalter, American Thinker, October 21, 2018].

Essentially, reporters and the Left want us to import people who have nothing to contribute and who hate our country to boot. Keep in mind, all the children from such migrants will be citizens. As Hispanics, they will also receive privileges in jobs and education because of affirmative action. And behind this 14,000 there are millions more that want to come to this country. If this caravan is not stopped, more will be on the way.

Historically, citizenship was tied to having a stake in the survival of the system. Therefore, the franchise was usually limited to those who own property or those who would or could fight for the country. What we have now is something akin to Negative Citizenship. If you have useful skills or would be grateful for the opportunity to come here, like the Afrikaners who are being so brutally persecuted in South Africa, the government won’t let you in. Reporters will even go after the people who say you should be let in. But if you are going to be a welfare drain, or say the country is evil and racist, or burn the flag, the entire Establishment will demand that laws be thrown out the window and the country be flooded.

There is a limit to this. There are only so many internal enemies and parasites that a country can survive. The way around this is simple. Immigration must be analyzed from the perspective of what benefits the existing national population. If people say that the interests of our own population are irrelevant, they are entitled to hold that opinion. But we are entitled to call it what it is—treason.