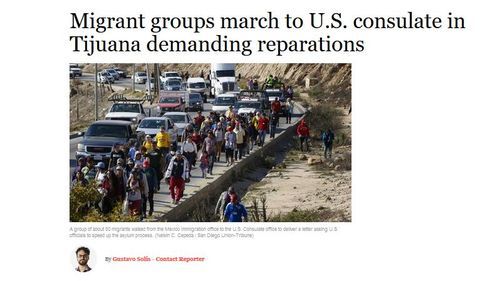 Welcome to Radio VDARE and I’m your host, Virginia Dare. Well, that migrant caravan seems to have given the game away. You remember them—they were supposed to be asylum seekers who wanted refuge from the dangerous environment they were living in. But now we see what this whole drama really was—a shakedown.

Two groups of Central American migrants made separate marches on the U.S. Consulate in Tijuana Tuesday, demanding that they be processed through the asylum system more quickly and in greater numbers, that deportations be halted and that President Trump either let them into the country or pay them $50,000 each to go home.

On the one-month anniversary of their arrival into Tijuana, caravan members are pressing the United States to take action but they are dwindling in numbers since more than 6,000 first arrived to the city’s shelters.

Obviously, what is needed is a wall, a reform of our asylum laws, the abolition of birthright citizenship, a total immigration moratorium, mandatory E-Verify, and a few other measures. Yet this whole situation raises another question. Can we simply pay people to stay away from us?

I would say this is insulting to them but this seems to be what these potential immigrants want. What’s more, other countries have offered money to unwanted migrants to get them to go back home. In 2009, Japan’s government offered money to guest workers to go back home. Spain and the Czech Republic did the same. Denmark offered migrants 12,000 pounds to get out. [Denmark to pay immigrants £12,000 to go home if they ‘can’t or won’t assimilate,’ by Allan Hall, Daily Mail, November 10, 2009]

Israel did something similar in 2015, offering Africans illegally in the country $3,500 and a one-way ticket elsewhere. Of course, it also paired this carrot with the stick of future enforcement actions.

This last method seems to have the most promise. After all, at this point we can safely conclude that what is driving most Third World immigration is the desire for material gain. So we aren’t really dealing with desperate people fleeing dangerous situations, we are dealing with people who want more money. Even the mainstream media propaganda hailing their efforts endlessly describes their quest “for a better life,” which judging from how migrants actually behave really just means a life with more stuff, usually paid for by the American taxpayer.

Migrants are behaving rationally. They know that Westerners don’t have the will to strictly enforce immigration laws, so they are going to risk danger to try to get into our countries. They will stop doing this if we change the calculation of costs and benefits.

Obviously, enforcement should be part of this. But instead of giving amnesty to illegals that are already here, we should consider paying them to go away. In the long run, we will save more money by not having them and their descendants here sponging on us. Migrants will also be more likely to accept the deal if it is paired with stricter enforcement efforts and an understanding that this is a one-time offer—if someone who is paid is caught again sneaking into the country, he or she is imprisoned.

Of course, the main argument against all of this is that migrants should not be rewarded for breaking our laws in any way. Our country should have the will and the confidence to defend its own borders. And remember the old saying—“Millions for defense, not one cent for tribute.”

Yet that requires a sense of patriotism and identity that seems to be missing from modern America. As we struggle to restore it, we should be willing to examine every option to cut down on the flood of Third World immigration. Time is running out, and we won’t get this chance again.

I’m Virginia Dare and we will talk again soon.