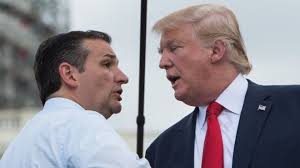 Will Someone Ask Ted Cruz What He REALLY Thinks About LEGAL Immigration Tonight?

Donald Trump is getting plenty of criticism for allegedly "breaking the truce" with Ted Cruz and attacking him. But Cruz was the one who fired first, albeit behind closed doors.

You look at Paris, you look at San Bernardino, it’s given a seriousness to this race, that people are looking for: Who is prepared to be a commander in chief? Who understands the threats we face?”

[Ted Cruz Said Nice Things About Trump All Campaign: Then He Dropped This Bomb at a "Private" Event, by Justin Green, Independent Journal, December 10, 2015]

I mean, Ted Cruz is running for president so it's hard to be outraged about this. Of course he's going to say stuff like this to people he wants to support him.

What is more concerning is this. (H/T @MarkSKrikorian) In speaking to a group of Latino Republicans, Cruz's campaign manager Chad Sweet apparently fell into the old Cruz pattern of boosting legal immigration.

[GOP Latinos Slam Ted Cruz and Self-Deportation on the Even of Debate, by Suzanne Gamboa, NBC, December 14, 2015]

Krikorian called out the Cruz campaign for essentially reversing the Senator's own program, which calls for a halt in increases in legal immigration while unemployment remains high.
The Cruz campaign responded:

Cruz’s staff reiterates the same principles that Ted Cruz promotes in both public and private. Anyone who truly cares about fixing illegal immigration understands that we must secure the border and enforce the law, and that includes building a wall that works, strengthening e-verify, and enforcing the law including deportation of those who are here illegally.

I’m taking this to mean Sweet did not call for increases in immigration, as the NBC report seemed to imply, and I’m glad to hear it. But that’s only an implication, because this response is about illegal immigration, about which the article was clear in any case.

Will someone ask Cruz about legal immigration tonight?