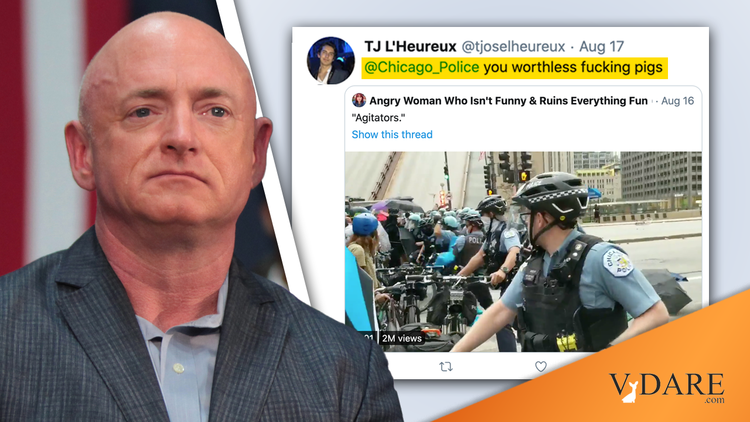 Will Democratic Officials Be Held Hostage By Their Own Junior Staffers?

The Democrats have an attractive candidate for US Senate in Arizona, Mark Kelly, a Gulf War combat aviator who then became an astronaut. His wife, then Democratic Congresswoman Gabby Giffords, was shot in the head by a crazy man in 2011 (she somehow survived).

But the question that is growing all the time is whether sane senior figures like Kelly can withstand the craziness of their junior staffers. From the Washington Free Beacon:

The campaign spokesman for Arizona Democratic Senate candidate Mark Kelly referred to police as “worthless f—ing pigs” on Twitter in August, a comment that could complicate Kelly’s effort to distance himself from radical anti-police sentiment from the left flank of his party.

T.J. L’Heureux, Kelly’s deputy press secretary, posted the message in response to a video that showed Chicago police clashing with protesters over the summer. “You worthless f—ing pigs,” wrote L’Heureux on Aug. 17, directing the message to the Chicago Police Department’s official Twitter account.

L’Heureux officially joined Kelly’s campaign as a spokesperson one week later, on Aug. 24.

The post came as the Kelly campaign has sought to portray itself as moderate on policing issues. Kelly, whose parents were police officers, has said he opposes defunding law enforcement agencies, a policy supported by some Democratic lawmakers and leaders of the anti-police protests erupting across the country.

My guess is that this attitude toward the police is pretty run-of-the among Kelly’s staffer’s under 35 or so.

That’s a concern because young staffers, especially women, have a growing ability demonstrated over the last few years to have their bosses canceled by insinuating sexual misbehavior or mere interest in sexual misbehavior even if not acted upon, political incorrectness, or just being mean to them on the job (notice the near cancelation of giant money-maker Ellen Degeneres).

How much are the Kellys, and Bidens, going to be held hostage by their junior staffers?