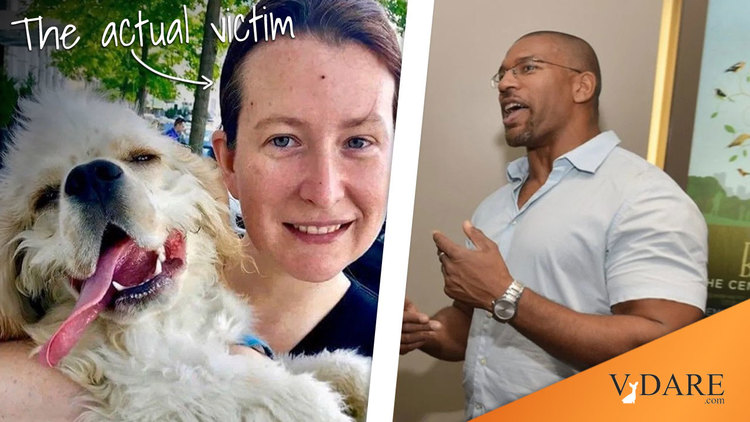 Will Central Park "Karen," Amy Cooper FINALLY Be Recognized As The Actual Victim Of Harassment And Threats?

Amy Cooper faced criminal charges for threatening to call the police about a black man named Christian Cooper who was harassing her for not having her tiny little dog on a leash in Central Park. He made what Steve Sailer called

Knowing that he is a gay birdwatcher with an expensive education, we can now say for sure that he wasn’t a rapist-murderer on the prowl for women in Central Park’s woods. But how was the woman he was threatening supposed to know that?

Now it looks like former NYT staffer Bari Weiss has come to a similar conclusion:

in hindsight, it is incredible (and not in an good way) that any of us thought a 40 second video told us everything we needed to know about the Amy Cooper story; huge respect to @kmele and @bariweiss for complicating the narrativehttps://t.co/rAtZd9Lhy6

This is a Podcast, not an article and I haven't listened to it yet, but here's the description:

Amy Cooper was not the internet’s first “Karen” — the pejorative used for a demanding, entitled white woman. But as the Central Park dog walker who went viral for calling the police on a black birdwatcher last year, she quickly became the paragon of the archetype.

Within 24 hours, Amy Cooper had been doxxed, fired from her job, and surrendered her dog. She wound up fleeing the country. She hasn’t spoken publicly since last summer. Until now.

In a wide-ranging interview with Kmele Foster, friend of Honestly and co-host of The Fifth Column, we revisit the story of what happened in the park that day. We show what the media intentionally left out of the story. And we examine the cost of mob justice.

The Real Story of “The Central Park Karen," Honestly with Bari Weiss, August 3, 2021

maybe they complicated the narrative about media coverage, but the only news in the piece is that Amy Cooper--despite her previous  "apology""—thinks she did the right thing.

Well, yes. We have many stories about what we call the "Dead Becky" phenomenon—women who found themselves alone with threatening black men and didn't call the police. One of those is headlined "And Five Minutes Later She Is Dead"—The Dead Beckys Who Should Have Called 911.

Steve Sailer asked Which Is Worse: Complaining About Harmless Blacks Or Failing To Alert Police About Dangerous Black Men? Ann Coulter wrote Don’t Be A Karen. Be A Becky—And Stay Alive!

This is the point. The harasser, Christian Cooper, should have thought of all the white women who have genuinely been robbed, raped, and murdered by black men in New York City alone, and kept his distance.

Here at VDARE.com, we knew all that before Bari Weiss or Kat Rosenfeld did.