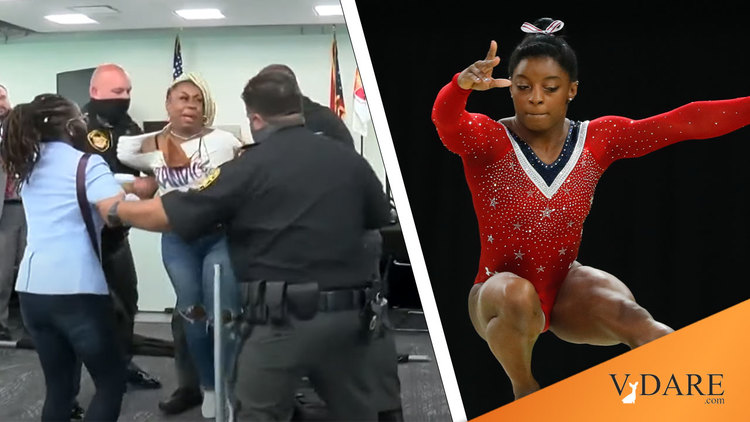 Why Is Nobody, Other Than Steve Sailer's Commenters, Suggesting That Simone Biles Was Stressed By Her Brother's Recent Triple Murder Trial?

Tevin Biles-Thomas was charged in the fatal shooting of three people at a New Year’s Eve party in 2018. This week, a judge said prosecutors had not presented enough evidence to convict him.

Tevin Biles-Thomas, the brother of the Olympic gymnastics champion Simone Biles, was acquitted of murder charges this week, less than a month after a Cleveland judge declared a mistrial in his case.

Mr. Biles-Thomas, 26, was charged in the fatal shooting of three people at a New Year’s Eve party in Cleveland in 2018. On Tuesday, Judge Joan Synenberg of Common Pleas Court in Cuyahoga County acquitted him, court records show, granting a motion filed by Mr. Biles-Thomas’s defense lawyers arguing that prosecutors had failed to provide enough evidence to justify a guilty verdict.

…Mr. Biles-Thomas’s previous trial ended abruptly on May 25 after jurors told Judge Synenberg that they had mistakenly seen legal briefs among the trial evidence.

It was not immediately clear how the briefs became mixed with the evidence, but they reportedly reflected debate between prosecutors and Mr. Biles-Thomas’s defense lawyers about whether he had acted in self-defense, Cleveland.com reported.

After the second trial adjourned on Tuesday, Judge Synenberg said, the mother of one of the victims, who was “very upset” with the outcome, ran toward Mr. Biles-Thomas, seemingly intent on injuring him. Video footage obtained by WKYC-TV shows the woman being pulled away by security officers in the courtroom. …

Representatives for Ms. Biles, a five-time Olympic medalist, did not respond to a request for comment on Wednesday. The Cuyahoga County Prosecutor’s Office declined to comment.

Mr. Biles-Thomas was arrested in August 2019 and charged with murder, homicide, voluntary manslaughter, felonious assault and perjury in connection with the shooting at a house party on Dec. 31, 2018, the authorities said.

The authorities said in a statement at the time of Mr. Biles-Thomas’s arrest that “an uninvited group” had entered the house around 11:30 p.m. the night of the shooting and that “an altercation ensued between the uninvited guests and those who were invited.” Shots were fired, striking “multiple” people, including the three who died, they said.

Jill Leovy, the L.A. Times’ homicide reporter whose book about impunity due to snitches getting stitches in South-Central L.A., Ghettoside (I’m guessing it was originally entitled Ghettocide), pooh-poohed the notion that most black-on-black shootings were the result of Michael Corleone-like organized crime cold-blooded calculations, but instead were due to excitable dumb stuff like “unwelcome party guests.”

Ms. Biles, 24, said on Twitter after her brother’s arrest in 2019 that she was “still having a hard time processing” what had happened.

“My heart aches for everyone involved,” Ms. Biles said. “I ask everyone to please respect my family’s privacy as we deal with our pain.”

In an essay for CNN in 2018, Ms. Biles said that she and her siblings had been removed from her mother’s custody when Ms. Biles was 3. Her mother had a drug addiction.

Ms. Biles is headed to Tokyo to compete in her second Olympic Games next month. Last month she became the first woman to ever execute a Yurchenko double pike, a dangerous move involving a back handspring and two flips in a pike position before landing on her feet.

From ESPN a few days before the judge ordered the acquittal:

CLEVELAND — Prosecutors in Ohio asked a judge to issue arrest warrants for three witnesses sought in the retrial of the brother of Olympic gymnastics champion Simone Biles in a deadly 2018 New Year’s Eve party shootout that left three men dead.

Tevin Biles-Thomas is charged in Cuyahoga County with murder, voluntary manslaughter and felonious assault; prosecutors on Tuesday dismissed a perjury count. The U.S. Army soldier’s first trial ended in a mistrial last month, after jurors were inadvertently given legal paperwork related to the case.

Authorities said gunfire broke out at the Cleveland party in 2018 when a group of men arrived uninvited. Nineteen-year-old DelVaunte Johnson, 21-year-old Toshaun Banks and 23-year-old DeVaughn Gibson were killed.

Cleveland.com reported that prosecutors told a judge last week that they have been unable to find the only witness who reported seeing Biles-Thomas fire a weapon. Prosecutors also said they cannot find two other witnesses, including one man who was shot in the head.

It’s almost as if snitches get stitches.

Last month, the judge issued arrest warrants for two witnesses who failed to appear to testify during the first trial; both took the stand later in the day wearing handcuffs, ankle chains and jail uniforms, Cleveland.com reported.

Prosecutors told jurors Thursday that two men got into an altercation and Biles-Thomas pulled a gun and opened fire. Authorities allege that one of the men who had been scuffling returned fire, killing the other, and Biles-Thomas then shot two others and fled. Police never found the guns and found no bullet casings with Biles-Thomas’ DNA.

Defense attorney Joe Patituce told jurors Thursday that Biles-Thomas didn’t fire any shots and was wearing a jacket of a different color than what witnesses described. He also attacked the credibility of a key witness, saying he had gotten “the golden ticket” of leniency in that case and another one after agreeing to implicate the defendant.

All this would weird me out and make me antsy about doing a back handspring and two flips in a pike position.