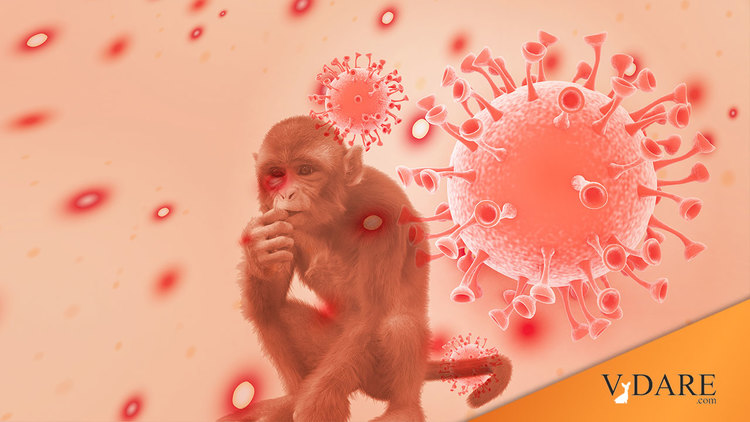 Back in the Stuff White People Like era of the first decade of this century, “raising awareness” was a social priority. But now during the Great Awokening, lowering awareness is more important, because the more confused and ignorant people are, the less likely they are to figure out who is to blame.

Consider the current monkeypox crisis. Fortunately, this infectious disease has a memorably catchy name that a huge fraction of the American population can remember. When it comes to raising awareness, the word “monkeypox” is an all-time great.

So, what do “experts” want to do? They want to change the name of monkeypox to something incomprehensible such as “hMPXV.”

Why Experts Want to Rename Monkeypox

…In the three months since the first cases of monkeypox were reported in Europe and the United States, public health experts have been urging the World Health Organization to come up with new nomenclature that might help to clear up any confusion and reduce the shame and stigmatization associated with a disease that has been spreading largely among men who have sex with men.

“Names matter, and so does scientific accuracy, especially for pathogens and epidemics that we are trying to control,” said Tulio de Oliveira, a bioinformatician at Stellenbosch University in South Africa who has been among those pushing the W.H.O.

In June, Dr. de Oliveira and more than two dozen other scientists from across the African continent published an open letter urging the organization to move quickly. Failure to do so, they warned, risked hamstringing efforts to contain the disease.

…The W.H.O. has acknowledged the problem. In June, the director general, Tedros Adhanom Ghebreyesus, said the organization would work with experts to find a new name, and last week, it issued a public call for suggestions. But many experts have grown impatient, saying the process has been too plodding given the disease’s rapid advance, which has now reached 92 countries, according to the W.H.O.

Obviously, the single highest priority in fighting this disease must be to change its name. What else could rank higher?

In a news conference last week, officials reported a 20 percent jump in cases over the previous week, with 35,000 cases, with the vast majority of infections concentrated in the Americas.

Many scientists have taken matters into their own hands and have begun using abbreviations such as “hMPXV” and “MPV” when writing or talking about the disease. There has been some progress in one aspect of the monkeypox nomenclature: A group of experts convened by the W.H.O. agreed to rename two monkeypox virus variants, or clades, replacing geographical references — Congo Basin clade and West African clade with Roman numerals (Clade I and Clade II).

Monkeypox is more than just a misnomer. Many experts say the word evokes racist stereotypes, reinforces offensive tropes about Africa as a perilous, pestilence-filled continent and abets the kind of stigmatization that can prevent people from seeking medical care.

Western literature through the ages is replete with ugly comparisons of Black people to primates, and throughout the 19th and early 20th centuries, illustrations rendering African-Americans as having simian features were a staple of popular American newspapers and magazines. Such racist sentiments haven’t entirely faded. President Ronald Reagan, when he was governor of California, was caught on tape calling African diplomats “monkeys.” Over the decades, racist slurs and imagery involving apes have repeatedly been hurled against Black people, including prominent politicians and celebrities.

… The naming of diseases has long been contentious and not just in Africa. In the first months after its emergence in China, the illness we call Covid-19 was unofficially dubbed “the Wuhan virus,” a designation that gained currency on social media before finding its way into the mainstream. What happened next was not entirely surprising: Violence against Asians surged in the United States and other countries. Business at Chinese restaurants evaporated. President Donald Trump repeatedly referred to the disease as “the China virus,” long after the W.H.O. had given the disease its current, banal-sounding moniker.

…For Dr. Perry N. Halkitis, an infectious disease epidemiologist and dean of the Rutgers School of Public Health, the debate surrounding the name monkeypox stirs up painful memories of another virus that arrived in the United States from overseas and prompted widespread fear, shame and finger-pointing. In the summer of 1981, the virus that we now know as H.I.V. first revealed itself through cancerous purple lesions on the bodies of gay men. Researchers called the disease GRID, or gay related immune deficiency. Though the name was never official, it gained traction, and in the years that followed, thousands of gay men would perish, many of them dying alone after being shunned by their families.

“Words carry weight, words carry value,” said Dr. Halkitis, who lost many friends during the early years of the AIDS epidemic. “The problem with those kinds of terms is that they attribute blame, and when you attribute blame your create stigma, which emboldens hate and undermines the well being of people.”

Think about how many gays would be alive today if the virus had been given its proper scientific name: “Nancy and Ronald Reagan’s Fault.”