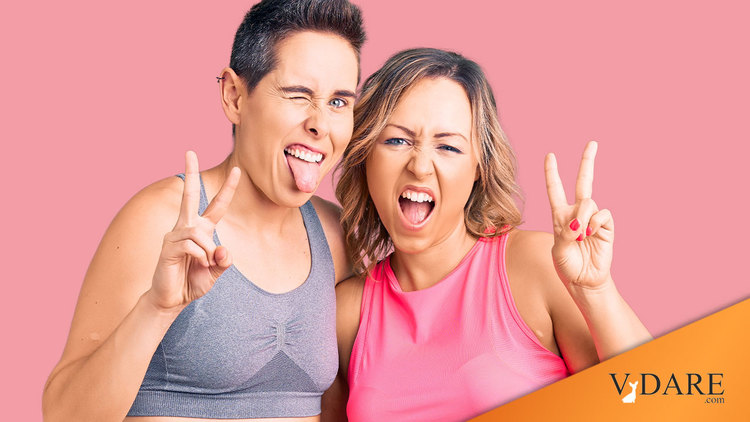 Why Are There More Lesbian Than Gay Male Jocks?

A Gay N.F.L. Player Broke a Barrier. Will Others Follow?

The number of publicly out L.G.B.T.Q. athletes in men’s biggest pro leagues lags far behind that in women’s sports. Will Carl Nassib’s announcement change that?

… In locker rooms, on fields and on courts, male athletes are taught to embrace heteronormative standards of masculinity.

Or maybe most sports, other than figure skating, water ballet, and a few others, developed as tests of heteronormative standards of masculinity? That would also explain why there are so many more lesbians in most sports than there are gay males.

I pointed this out 27 years ago in “Why Lesbians Aren’t Gay.”

We can test whether there really are a lot of gay male jocks but they are just too oppressed to come out of the closet by looking at death rates from AIDS during the 1980s–90s. Two or three NFL players died of AIDS, two MLB players (one gay, one junkie), one NHL player, Magic Johnson got first crack at the new drugs and survived, and no golfers.

In contrast, both male figure skating gold medalists in the 1970s died of AIDS, the top American diver ever survived it, and a whole bunch of the most famous dancers (Rudolf Nureyev, Alvin Ailey, Robert Joffrey, and Michael “Chorus Line” Bennett) died from it.

Interestingly, rock stars were not hard hit: after Freddie Mercury, the most famous victim was … who? The guy in the B-52s? Rock stars tend to be the not terribly masculine pretty boys who figure out it’s a good way to get girls.

“I think it’s men and the machismo culture that pro sports are played, in particular,” that has inhibited men who identify as gay, bisexual, or queer from coming out, said Richard Lapchick, the director of the Institute for Diversity and Ethics in Sport.

Maybe it inhibited gays not only from coming out but also from going into sports?

In Major League Baseball, Glenn Burke, an outfielder who spent four seasons with the Los Angeles Dodgers and the Oakland Athletics in the 1970s, is known as the first player in major league history to come out to his teammates during his career. He came out publicly in 1982, three years after his last major league game. Burke, who died of AIDS complications in 1995, was supported by some teammates but was largely met with discrimination.

Glenn Burke was especially discriminated against by opposing pitchers who kept getting him to swing at pitches out of the strike zone. I remember him from the 1977–78 Dodgers when he was The Rallykiller. He was the ultimate Looked Good in a Uniform player. Dodger coach Jim Gilliam thought he’d be the next Willie Mays but he never developed really any major league skills.

…Men’s pro teams in America have lagged behind women’s, where L.G.B.T.Q. stars in team and individual sports have publicly identified themselves and still been celebrated. W.N.B.A. stars Diana Taurasi, Brittney Griner and Elena Delle Donne are among the league’s current players who have come out as lesbian and Layshia Clarendon, who openly identifies as transgender and nonbinary, in January became the league’s first player to have a top surgery while active.

Nothing reflects the health of sports better than self-mutilation.

… In the Ultimate Fighting Championship, the highest-caliber mixed martial arts promotion, the best female fighter of all time, Amanda Nunes, is an out lesbian.

Wow. What were the odds of that?