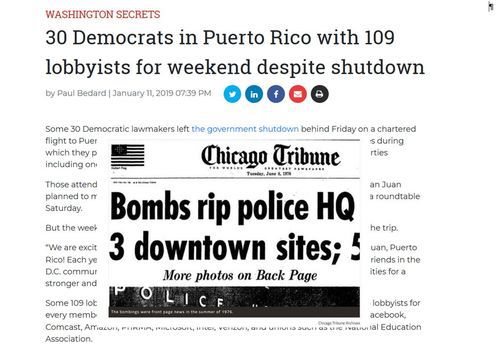 Democrats are ignoring President Trum's defensive tactics on the shutdown standoff over the border wall. Instead, they are partying in Puerto Rico with lobbyists and the stars of the musical "Hamilton" [30 Democrats in Puerto Rico with 109 lobbyists for weekend despite shutdown, by Paul Bedard, Washington Examiner, January 11, 2019].

"Hamilton" is, of course, something that would be called cultural appropriation if it was being done to any other group but whites, as it is simply substituting blacks and Hispanics for the Founding Fathers, especially the eponymous pseudo-monarchist and immigration restrictionist ['Hamilton' as the ultimate expression of the system, by Gregory Hood, American Renaissance, April 25, 2016]

Yet while the Main Stream Media invents "extremism" and "radicalism" in Republican ranks, Democrat racial nationalism is hiding in plain sight. Lin-Manuel Miranda, creator of the musical, is a passionate supporter of Oscar Lopez Rivera, a leftist Puerto Rican independence activist who led a group that murdered Americans.

If you’ve never heard of Oscar Lopez Rivera or FALN, you can read all about them in Bryan Burrough’s excellent history of the 1970s leftist underground, “Days of Rage.” Lopez Rivera’s FALN tried to murder cops. They murdered four innocent people eating lunch. They murdered a man in his office. They committed strings of bombings in multiple cities...

Most of FALN was rounded up on April 3, 1980, during an attempt to rob another armored car, but robbery mastermind Lopez Rivera wasn’t with them at the time. By a curious coincidence, though, another Puerto Rican terrorist group started up shortly after: Puerto Rican Armed Resistance, which bombed Penn Station in New York then set off a bomb at the JFK airport that killed a man.

That bomb used the FALN bomb design, a caller to the New York Post claimed the bombs were the work of FALN’s bombmaker Guillermo Morales, and once Lopez Rivera was busted in a random traffic stop after the JFK bombing, Puerto Rican Armed Resistance was never heard from again. Funny, that.

[Why does Lin-Manuel Miranda Enthusiastically Support A Domestic Terrorist, by David Hines, The Federalist, December 14, 2018]

Of course, the MSM will never express concerns about such things, even as there is a collective journo meltdown over President Trump citing Pat Buchanan, whose erudition and patriotism surpasses all of CNN and MSNBC combined.

Still, President Trump could take this as an opportunity. He should push for Puerto Rican independence. Kick this dependency off the American dole. Heck, he could even say he's trying to give Lopez Rivera what he wants. At the very least, it would force a conversation the MSM does not want to have.