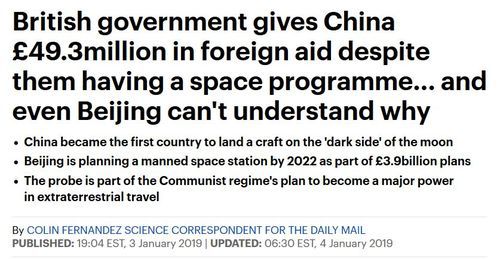 At this point, people all around the world are beginning to think the 21st century will be the Chinese century. The emerging superpower achieved an unprecedented scientific success when it landed a rover on the dark side of the moon [Chang’e-4: Chinese rover now exploring Moon, by Paul Rincon, BBC, January 4, 2019].

Yet even as China continues its march towards hegemony in Asia and domination of the global economy, the United Kingdom is sending it foreign aid.

Whitehall departments lavished £49.3million of the UK’s foreign aid budget on China in 2017.

Schemes funded included a £981,950 study into air pollution in cities and a £860,732 project to encourage the population to reduce its salt intake, while £58,555 went on developing a plan to help protect the Chinese giant salamander.

The Department for International Development no longer sends cash aid to China but other Whitehall departments have continued to spend it there.

Handouts in 2017 included £333,614 from the Department for Business, Innovation and Skills for research into providing gastric cancer screening in rural China. The department lavished £713,796 on a research programme into renewable energy systems such as floating offshore wind power and wave energy, and £107,711 on a survey into how China’s land and water use is causing widespread soil degradation.

The cross-Whitehall Prosperity Fund gave £34,627 to a project to develop China’s electric car industry, while the Department for Environment Food and Rural Affairs spent £35,701 on an anti-ivory campaign on social media.

International Development Secretary Penny Mordaunt admitted last May that China does not believe it should receive foreign aid handouts.

[British government gives China 49.3 million pounds in foreign aid despite them having a space programme… and even Beijing can’t understand why, by Colin Fernandez, Daily Mail, January 4, 2019]

Part of the reason may be that these aid programs no longer serve any national interest or geopolitical end. They are simply an end in themselves, a way for professional bureaucrats who want to “make a difference” to justify their employment. Doing something for Queen and Country comes off as icky and a little “racist,” but helping the giant salamander in China is noble and heroic. The point is that you can to be employed for a vaguely altruistic end that sounds like it benefits others, not yourself, even as you collect a salary.

This way of thinking is even going corrupting the military, at least the top ranks. Prior British recruitment ads emphasized love of country, pride in identity and history, and the possibility of a challenge. Today, British recruitment ads emphasize weakness and victimization, to the point that one of the soldiers unwittingly featured in the campaign is leaving the service in disgust. 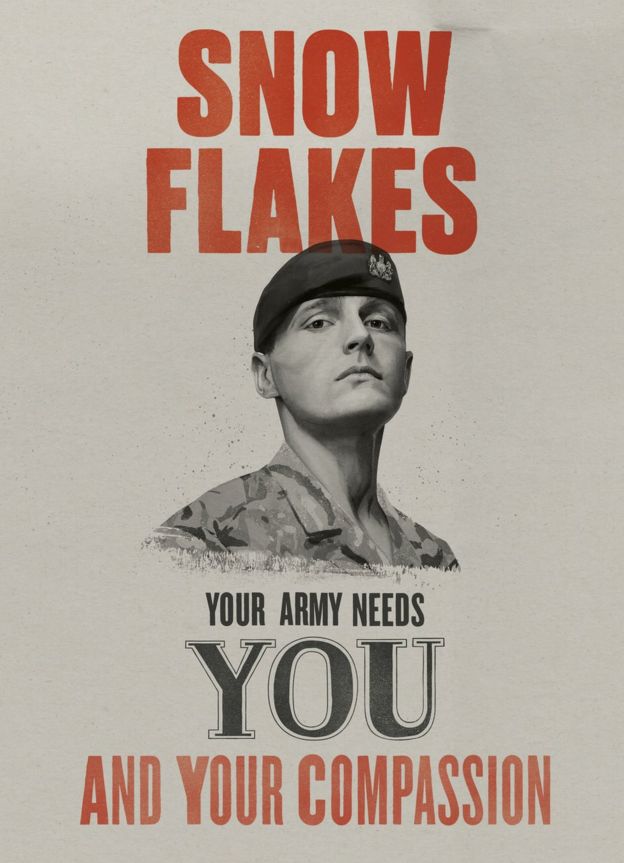 Guardsman McWhirter has told friends he has been bombarded with mocking messages from colleagues and feels that, because he was not forewarned, the Army has left him open to ridicule. He says he will resign at the earliest opportunity.

The soldier, who is based at Wellington Barracks in London, expressed his fury on Facebook in a discussion with other troops dismayed about the £1.5 million campaign. One squaddie wrote: ‘Imagine the army taking a photo of you and writing “snow flake” in massive bold letters above your head. I’d be signed straight off.’

[Guardsman to resign in disgust after his picture was used below the word ‘snowflakes’ in a controversial recruitment campaign, by Mark Nicol, Daily Mail, January 5, 2019]

Comparing the headlines about China and the United Kingdom these days, it’s easy to see which state is rising and which is declining. As Peter Hitchens said, “The next proper history of this country will be written in Chinese.”

Peter Brimelow may be understating the case for what those responsible deserve.