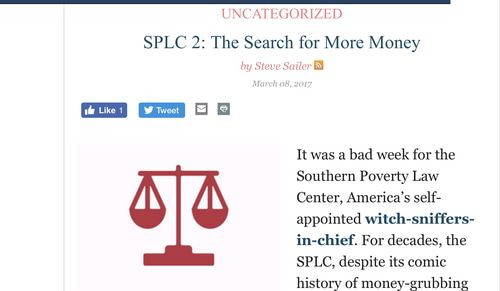 What Does "SPLC" Even Mean?

I don”t feel all that sorry for the SPLC because it’s enjoyed a most remunerative last 46 years.

You may recall the SPLC backing its first president, Martin Luther King Jr., in its heroic civil rights battles of the 1950s.

(Except, technically, that wasn”t the SPLC, that was the SCLC: Southern Christian Leadership Conference.)

Or you may remember the brave black radicals of the SPLC, such as John Lewis, Stokely Carmichael, and H. Rap Brown, fighting bigoted Southern sheriffs in the 1960s. (Except that wasn”t precisely the SPLC either, that was the SNCC: Student Nonviolent Coordinating Committee.)

The oddly named Southern Poverty Law Center was actually founded in 1971, well after the great victories of the Civil Rights Era had been won, by two white guys, Joseph J. Levin Jr. and Morris Dees, the latter a member of the Direct Marketing (i.e., junk mail) Association’s Hall of Fame.

It’s not all that clear what the SPLC has to do with “poverty,” other than in helping to erase the last trace of it from Mr. Dees” gaudy lifestyle. But it likely hasn”t hurt fund-raising that the acronym SPLC is easily mistaken for the legendary SCLC and SNCC.

Perhaps the confusion is just a coincidence. On the other hand, it’s reminiscent of the movie Boiler Room, a predecessor of The Wolf of Wall Street, in which the penny-stock peddlers work for a firm named “J.T. Marlin” to get the readily perplexed to mistake it for J.P. Morgan.