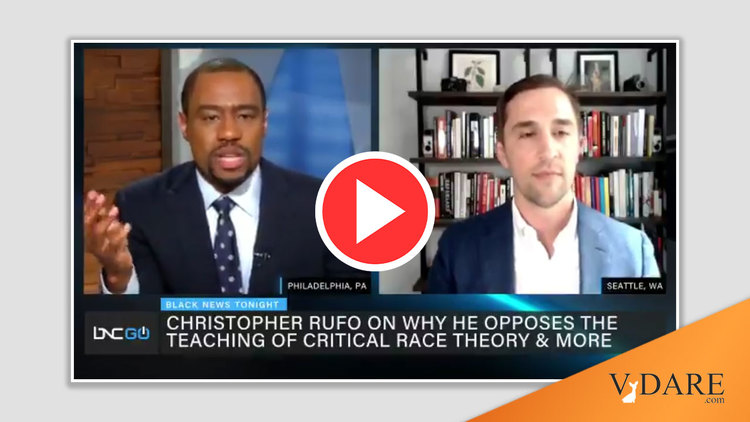 “What do you like about being White?” I asked this question to anti- Critical Race Theory advocate Christopher Rufo. He stated that Whiteness was always only painted as negative, so I asked him to offer something different. Peep his response: pic.twitter.com/H5IkAyv2Co

In this video the white man’s refusal to boast about his race probably strikes the black man as a white racist microaggression, and with good reason. After all, what other race turns the other cheek to racial defamation so often and attempts to appeal to (white-invented) abstract ideals of universality that only whites really find convincing? The ethical superiority of the white race, as manifested in whites denying any superiority whatsoever, must be infuriating to other races.

Of course, the fundamental problem was outlined in Sobran’s Newsletter in April 1997:

Why They Hate Us
by Joseph Sobran

Western man towers over the rest of the world in ways so large as to be almost inexpressible. It’s Western exploration, science, and conquest that have revealed the world to itself. Other races feel like subjects of Western power long after colonialism, imperialism, and slavery have disappeared. The charge of racism puzzles whites who feel not hostility, but only baffled good will, because they don’t grasp what it really means: humiliation. The white man presents an image of superiority even when he isn’t conscious of it. And superiority excites envy. Destroying white civilization is the inmost desire of the league of designated victims we call ‘minorities.’

After such knowledge, what forgiveness?

How can the growing inferno of anti-white racist hatred abate? The win-win solution is for nonwhites to lift themselves up so that the gap that emerged over the last 600 years is not so embarrassing to them. The East Asians have vastly closed the competence gap and are working, slowly, on the creativity gap (note the sizable number of hard science Nobels the Japanese have won in this century). Blacks have somewhat narrowed the creativity gap and have some potential to narrow the competence gap if they make the effort. But everybody today appears terrified to ask blacks to try harder to not behave badly, so, judging, by the soaring murder rate, blacks are behaving worse.