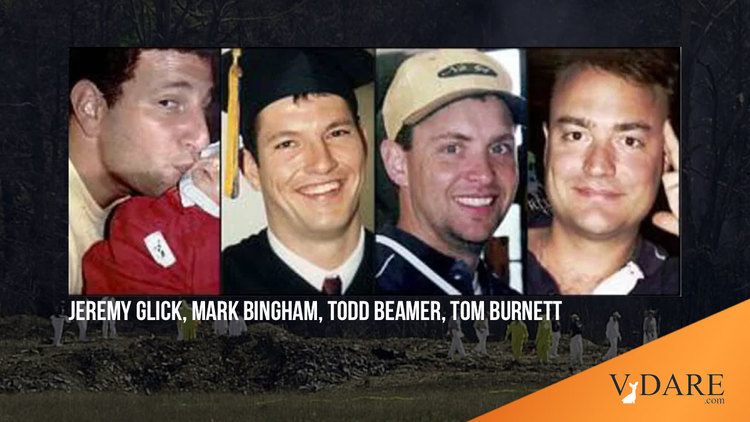 Were The (White, Male) Heroes Of Flight 93 "Random" As George W. Bush Said?

Earlier: Whites Made Up 85% of US Soldiers Who Died in Afghanistan

At a ceremony at the crash site of Flight 93 in Pennsylvania, George W. Bush orated:

“The passengers and crew of Flight 93 could have been any group of citizens selected by fate. In a sense, they stood in for us all. The terrorists soon discovered that a random group of Americans is an exceptional group of people.”

But, by the standards of the Great Awokening, how random, how representative were the Flight 93 passengers who self-organized the assault on the terrorists in the cockpit, probably saving the Capitol from destruction? Today, they seem extremely deplorable, the most derided of demographics: white male frat jock yuppies: Haven Monahans all, even the gay one.

We don’t know exactly what happened on Flight 93, but the core group of passengers usually identified as leaders of the assault were:

Burnett studied economics at Saint John’s University in Minnesota, where he was a quarterback on the football team. After two years, an injury shortened his football career and he transferred to the Carlson School of Management at the University of Minnesota. He was named president of the Alpha Kappa Psi fraternity, then later graduated with a B.S. degree in Finance. He went on to earn a Master of Business Administration at Pepperdine University.[2][5]

He graduated from Los Gatos High School as a two-year captain of his rugby team in 1988. As an undergraduate at the University of California, Berkeley, Bingham played on two of Coach Jack Clark’s national-championship-winning rugby teams in the early 1990s. He also joined the Chi Psi fraternity, eventually becoming its president. Upon graduation at the age of twenty-one, Bingham came out as gay to his family and friends.

He was on his way to a fraternity brother’s wedding.

He and his high school sweetheart, Lyzbeth, were prom king and queen in 1988.[4]

Glick was an American National Collegiate Judo champion while he was a student at the University of Rochester in Rochester, New York,[5][6] where he was president of the Rochester chapter of the Alpha Delta Phi fraternity. He later worked as a sales and marketing executive for Vividence, an e-consulting company in San Mateo, California. Glick also played rugby at the University of Rochester where he was a team Captain.[7]

An old boss of mine was CEO of the start-up where Jeremy Glick worked. He said that Glick’s heroism was very much in character.

The “Let’s roll” guy was the only one of the four who was not a fraternity president or even a fraternity member at all, as far as I can tell, but he was captain of the Wheaton College basketball team.

Beamer attended Fresno State University, where he majored in physical therapy and played baseball, in the hopes of playing professionally, but injuries he suffered in an automobile accident ended these plans. He returned home to Illinois and transferred to Wheaton College, a Christian liberal arts college. At Wheaton College he majored initially in medicine before switching to business. He continued to play baseball and as a senior became captain of the basketball team.[1] He graduated in 1991.[5] …