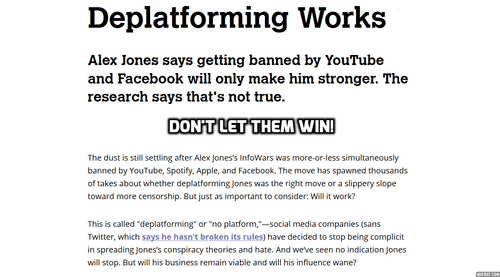 Sent out as an email September 12, sign up here for VDARE.com E-Bulletins, WHICH ARE NOW  BACK!

About a week ago, VDARE.com was purged from MailChimp—our second email marketing service. Our announcement of the attack has been delayed because it took us a little while to regain access to our email lists. Despite explicitly stating in their terms of use that email lists are proprietary to the client, Mail Chimp only made ours available to us after our lawyer sent a threatening letter.

Mail Chimp's action follows the previous purge I reported in July, when we were kicked off of Constant Contact. I have no reason to believe that any other service we sign up for will be more tenacious than these, so we’re weighing our options carefully.

Of course, this is a big distraction and an obnoxious waste of our resources, which is exactly what our enemies want in the short term. In the long term, they want us purged from American discourse completely.

Jason Koebler [Email him] at the VICE channel Motherboard ran a piece earlier this month entitled, “Deplatforming Works,” and I can tell you from personal experience, he’s right. I don’t need a team of researchers to tell me that after a purge from a major digital platform, “the falloff is pretty significant and [the purged] don’t gain the same amplification power they had prior to the moment they were taken off these bigger platforms.”

I can see it in our numbers.

Koebler goes on to say, “Deplatforming works ‘best’ when the people being deplatformed don’t have any power to begin with,” and by “best” he means most lethally to the message.

The question of “power” is an interesting one, because the truth is, we don’t have any. But our ideas do. Our principles, that:

are impossible to ignore.

The faster the patriotic immigration reform movement grows in numbers and boldness, the more the emerging Totalitarian Left tries to silence us. When they can’t stifle our message online, or through mass brainwashing, they’ve shown no compunction in taking to violence in the streets. President Trump was absolutely on the money when he said to evangelicals recently:

“It’s not a question of like or dislike, it’s a question that they will overturn everything that we’ve done and they will do it quickly and violently,” Trump said. “The level of hatred … is unbelievable.”

There are powerful forces united against us, and we cannot let them win. We are strong, we are tenacious, and we’re not going anywhere. In the case of email marketing, we’ve retreated to a relatively self-sufficient alternative: we’re not using new service, we’re just sending out emails from our own servers. This solution is far from ideal, because it means we don’t have any of the tracking and marketing bells and whistles others have, and most importantly, our emails are far more likely to land in your spam.

Please make sure that you have us flagged as a reliable sender in your email account. Otherwise, you may never hear from us again.

I’ve said it before and I’ll say it again: I’m boot-strapping this organization ever nearer to self-reliance with each battle, won or lost. And I’m going to take the movement with me.

But I can’t do it without your support. It’s not easy to reinvent the wheel. And it’s certainly not free.

Please give your most generous donation today.