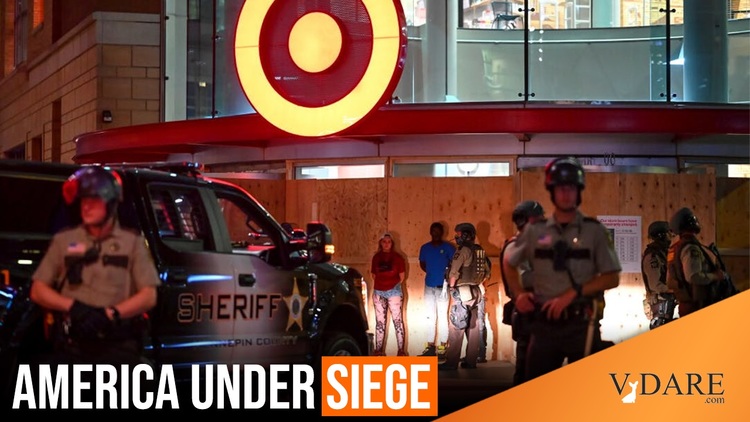 "We Can’t Live Like This, Shackled To A Powder Keg, Waiting For The Next Thug To Light The Match."

We aren’t in Patrick Henry’s situation yet, but we aren’t far off. Unless President Donald Trump can restore order, we face a violent future. I doubt it will be “civil war,” but it may be a permanent crisis, and there will be countless victims.

Patrick Henry before the House of Burgesses in Williamsburg, Virginia.

Earlier this week, a black man killed himself in Minneapolis, Minnesota. He was a murder suspect who shot himself in the head. We can watch the video.

When there’s a gunshot and a body, police respond. This doesn’t mean that the police killed someone. Nonetheless, some blacks began screaming “y’all shot him,” and this falsehood quickly spread.

Blacks rioted. They damaged more than 40 buildings and smashed or looted bars, restaurants, chain stores, and a mall. Police arrested 132 people. Disgusted storeowners and residents told journalists the next day that they were leaving the area.

While the governor and mayor said they opposed violence, both indulged the mob. Minnesota governor Tim Walz, who has previously claimed “white supremacists” were partially responsible for riots in Minnesota, said that the “pain that people are feeling is real.” Minneapolis mayor Jacob Frey, who has also blamed “white supremacists” for previous violence, also groveled: “We recognize that none of this happens in a vacuum. And it is righteous to vent that pain in anguish in the form of peaceful protest.”

The National Guard and state police kept order the next night, but a “well-known group of community members known as MAD DADS” also helped. The group was founded by black men to help law enforcement fight crime, though it is supposedly multiracial now. Members reportedly served as “middlemen” between law enforcement and rioters, and state police were reportedly “lenient on arrests.” In other words, police had to rely on outside groups to protect citizens, because if they did it directly, they might have faced more violence. The Minneapolis Star-Tribune reported that many residents thought police were “lying” about the suicide. If the disturbing video had not been released, there would have been far worse rioting.

This leads to the second conclusion. We are in a permanent crisis. Journalists, professors, politicians, and activists tell blacks that “white privilege” causes violence. Since all groups are equal, what but “racism” could explain blacks’ problems? The white privilege conspiracy theory incites hatred and violence. Worse, the more irrationally blacks behave, the more benefits they get. Even in this case, the governor and mayor sounded almost apologetic about opposing riots based on false reports.

In a racially integrated country with so many people, it’s inevitable that police will occasionally shoot or harm a black person, especially when blacks commit so many crimes. Today, every case means a potential riot and innocent victims. Even when no one is killed, it doesn’t mean citizens don’t suffer. The looting finishes off small businesses already hit by the pandemic. The biggest beneficiary is Amazon, which takes over even more sales. Worse, when those like Kyle Rittenhouse, the Proud Boys, or the Rise Against Movement act to restore order, the state suddenly acts with great force against them.

We can’t live like this, shackled to a powder keg, waiting for the next thug to light the match. We deserve more than obvious double standards and the ever-present threat of violence. Whites won’t tolerate this forever. The repression we face is far more sweeping and arbitrary than anything our ancestors faced under George III.

If we must live in a multiracial democracy, the rule of law must apply equally. The state must dispense justice without regard to ideology. If it can’t or won’t, the social contract is broken. In that case, European-Americans have the right and duty to demand a homeland where we can live in peace. The choice is being forced on us, whether we want it or not.