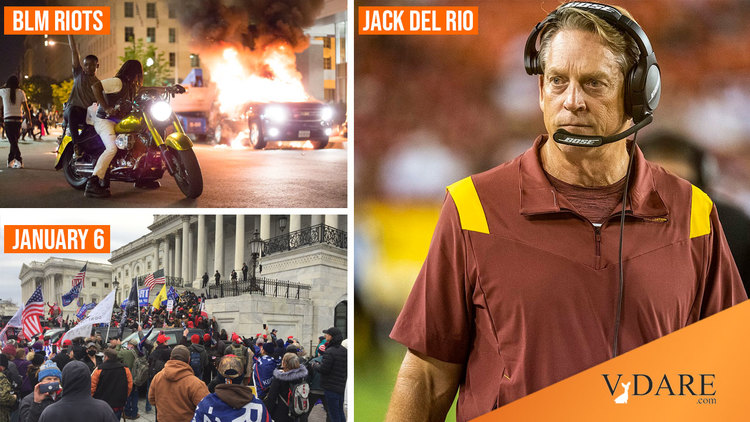 Our rulers are attempting to criminalize not just dissent, but mild criticism by those deviating ever-so-slightly from the official script.

The Washington Commanders have fined defensive coordinator Jack Del Rio $100,000 after his comments earlier in the week that referred to the events of Jan. 6, 2021, at the U.S. Capitol as a “dustup” and compared that day to “riots, looting, burning” during protests in the summer of 2020.

In a statement, Washington coach Ron Rivera said he met with Del Rio on Friday morning to express his disappointment in the coordinator’s comments.

“His comments do not reflect the organization’s views and are extremely hurtful to our great community here in the DMV [D.C.-Maryland-Virginia],” Rivera said. “As we saw last night in the hearings, what happened on the Capitol on January 6, 2021 was an act of domestic terrorism. A group of citizens attempted to overturn the results of a free and fair election, and as a result lives were lost and the Capitol building was damaged.”

The fine money will be donated to the U.S. Capitol Police Memorial Fund, Rivera said. The Capitol riot left more than 100 police officers injured, and five police officers serving at the Capitol on Jan. 6 died in the days and weeks afterward.

Del Rio also will address the team Tuesday, when the Commanders will begin their mandatory three-day minicamp.

On Wednesday, Del Rio defended a reply he made on Twitter two days earlier, when he tweeted, “Would love to understand ‘the whole story’ about why the summer of riots, looting, burning and the destruction of personal property is never discussed but this is??? #CommonSense.”

Del Rio said he felt that there were two standards being applied and that he was just expressing his opinion. But in response to the final question of his news conference, Del Rio called the U.S. Capitol invasion a “dustup,” creating another controversy for the franchise.

He apologized in a statement later Wednesday saying, “Referencing that situation as a dust-up was irresponsible and negligent and I am sorry. I stand by my comments condemning violence in communities across the country. I say that while also expressing my support as an American citizen for peaceful protest in our country.”

Rivera said Del Rio has a right to voice his opinion, “However, words have consequences, and his words hurt a lot of people in our community.

“I want to make it clear that our organization will not tolerate any equivalency between those who demanded justice in the wake of George Floyd’s murder and the actions of those on Jan. 6 who sought to topple our government. … I feel strongly that after our conversation this morning, he will have a greater understanding for the impact of his language and the values our team stands for.”

On Thursday, the Virginia General Assembly decided to table a vote until next year on whether to help fund a Commanders stadium in the state. Some state senators said Del Rio’s comments made that decision easier, although there already had been momentum toward tabling the vote.

That same day, NAACP president Derrick Johnson called for Del Rio to “resign or be terminated” because of his comments.

“His comments could not have been more offensive and ignorant,” Johnson said in a statement. “The January 6th insurrection — an attempted coup — was far from a ‘dust-up’. Each day we learn more and more on just how close our democracy came to autocracy. Downplaying the insurrection by comparing it to nationwide protests, which were in response to a public lynching, is twisted. You can’t coach a majority Black team while turning your back on the Black community. It’s time for you to pack up and step off the field.”

However, sources close to some defensive players said they didn’t think there would be a division. A source close to defensive end Chase Young said Del Rio was “his guy,” and defensive tackle Jon Allen told NBC Sports Washington, “I don’t care about his opinion as long as he shows up every day and works hard. That’s what I want from my defensive coordinator.”

Del Rio said Wednesday that he would meet with any player who had an issue with what he said.

The House committee investigating the 2021 insurrection conducted its first public hearing Thursday. The six hearings, which are expected to last until late June, include “previously unseen material” about what the committee discovered in the course of a 10-month investigation.

We’ve past the point of no return. Those in power have gone all-in on the January Sixth insurrection mythology, pretending the insanity of the Black Lives Matter/Antifa riots of May-August 2020 never occurred.

The horrific fine on a football coach for the former Washington Redskins is a reminder what happens to those who transgress upon now mandated myths holding aloft the post Trump-era of American politics.

The problem: the tighter the vise of the increasingly overt anti-white system, the more slip through their fingers.

They’ve gone all in on January 6th. And in this act of desperation, our elite shows they have nothing left to hold together the nation save the institution of fear as a currency for participation in the charade that is 2022 America.