The Washington Post tells us this morning that  "Washington National Cathedral is taking its time to ponder its Confederate window," which features Robert E. Lee and Stonewall Jackson.

Apparently, Dylan Roof's rampage in South Carolina triggered, shall we say, the discussion at Central Command for Liberal Christianity in the United States.

The Post quotes a black fellow who doesn't much care for Marse Robert and his top lieutenant or for thoughtful deliberation or discussion of the matter:

For Raymond Blanks, that’s too much thinking and not enough doing.

“The windows are a contradiction to Christian values,” Blanks said. “They are symbolic of the fact that unfortunately, white Christians have not always been holy about the issue of justice.”

Blanks, a retiree who lives in Northeast, is an African American Episcopalian. “If I happen to have a bench near those windows and I’m looking up to heaven, you can imagine how disturbed I’m going to be if I’m praying to God and those guys are looking over my shoulder,” he said. “It’s just not going to work.” 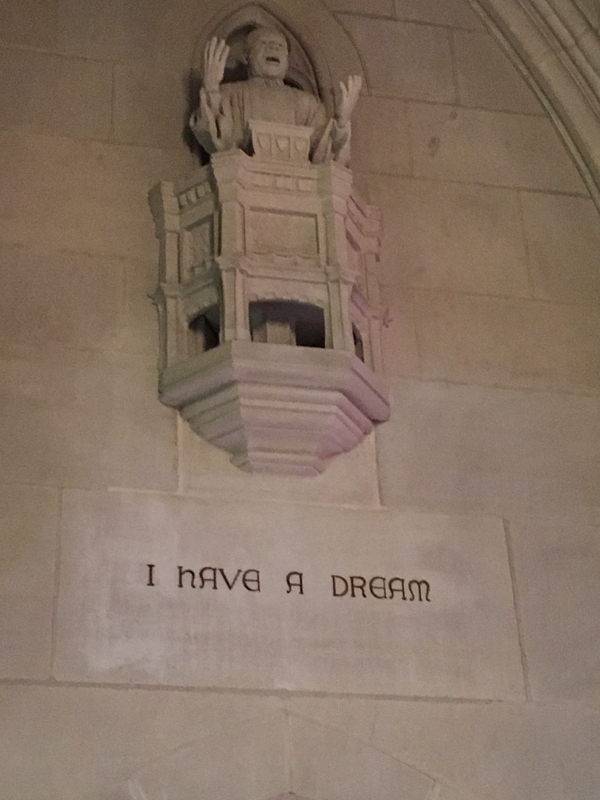 I'm going to go way out on a limb and conclude that neither Mr. Blanks nor those who agree with him are much worried that some black Christians "have not been holy" themselves. Martin Luther King, for instance. A statue of the great man adorns the cathedral.

He cheated on his wife, stole much of the material for his doctoral thesis, and like many liberal Christians, didn't believe in the divinity of Jesus Christ. In other words, he didn't act like much of a Christian, and he wasn't one, technically speaking. The cathedral is the perfect place to lionize him.

Anyway, again, I'm going to go way, way out on a limb and say you won't hear Mr. Blanks or those who agree him about those awful Confederates say, "you can imagine how disturbed I'm going to be if I'm praying to God and that guy is looking over my shoulder. It's just not going to work."