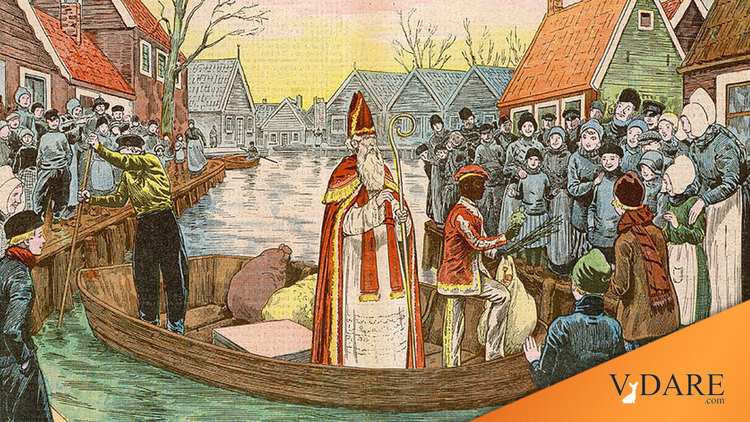 War On Christmas In Holland: Street Protests Against Cultural Marxism Over "Zwarte Piet"

Above, the traditional Dutch Santa Claus—spelled Sinterklaas—accompanied by his "Moorish" helper "Zwarte Piet" (actually a Dutch child in blackface)

From the new blog The Natural Ethnopatriot:

With Christmas season approaching, we’ve been reading how some people have been agitating in the Netherlands — over the Christmastime character Zwarte Piet, or “Black Pete,” who accompanies St. Nicholas in his rounds. Around 90 people were arrested during the street protests.

The whole thing seems ridiculous, this tempest-in-a-teapot involving a harmless character from Dutch folklore. Piet was said to have been a ‘Moor’, not a sub-Saharan African, but nonetheless nonwhite residents of the Netherlands were motivated to protest against the character as if some vital principle were at stake. The critics of Zwarte Piet assert that nonwhite children were damaged by having to see a blackface character at Christmastime. They were traumatized for life, I’m sure.

This kind of thing is typical of the cultural Marxists on the left: they won’t tolerate the slightest bit of deviation from their politically correct dogma, even on trumped-up complaints like this. No; all violations of their decrees must be stamped out with force. No prisoners taken, no dissension brooked. No stone unturned, or no turn unstoned. Anything politically incorrect must not be tolerated, no matter how trivial the violation might be. Look at the feminist firestorm over the shirt worn by a scientist after the historic feat of landing a space probe on a comet. The shirt, depicting scantily clad women, was an outrage, and people must be punished, must apologize, must be put in their place.

But for whatever reason, banning Zwarte Piet was a bridge too far for the Dutch, apparently. And I was pleased to see that reaction; maybe I thought the people of the Netherlands would turn out to be as politically correct as their Dutch-American cousins in Michigan and elsewhere. Maybe I was wrong.

This is where multiculturalism (which is a product of mass immigration) curtails our freedoms. We who live in the appropriately-termed ”host nations” lose our freedoms to speak freely when we have millions of ‘Others’ planted in our midst. We can’t talk ‘amongst ourselves’ while others are observing and judging everything we say and do. Is this freedom? We can’t be ourselves, we can’t speak without mentally checking and censoring ourselves lest we spark the inevitable cries of ”racism”, xenophobia, and all the other weapon-words that are deployed against us. [More]

The traditional reason for the small Moorish helper is that the original St. Nicholas was a Bishop in Turkey, and might have had a Moorish helper, and it's fun to dress up in blackface. (See The Continuing Evolution of Zwarte Piet, from the St. Nicholas Center.)

The reason this wasn't considered "offensive" as recently as the 1960s is that there were no black people (or "Moorish" people) in Holland to be offended.

Events like the murder of Theo van Gogh, and constant threats of death against Geert Wilders  show that things have changed as far as people being murderously offended is concerned, but the Dutch are at least fighting back.