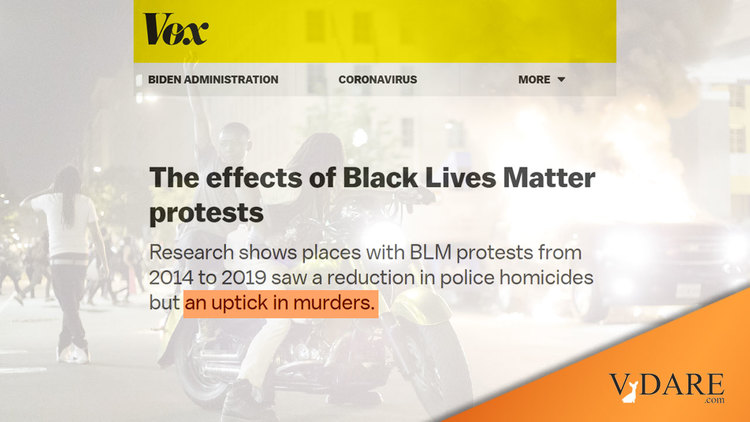 VOX: Black Lives Matter Protests Have Killed About An Order Of Magnitude More People Than They Have Saved

Earlier: How Much Blood Does Black Lives Matter Have On Its Hands?

Research shows places with BLM protests from 2014–2019 saw a reduction in police homicides but an uptick in murders.

There’s long been a fierce debate about the effect of Black Lives Matter protests on the lethal use of force by police. A new study, one of the first to make a rigorous academic attempt to answer that question, found that the protests have had a notable impact on police killings. For every 4,000 people who participated in a Black Lives Matter protest between 2014 and 2019, police killed one less person.

Travis Campbell, a PhD student in economics at the University of Massachusetts Amherst, released his preliminary findings on the Social Science Research network as a preprint, meaning the study has yet to receive a formal peer review.

While Campbell’s research does not encompass the events of summer 2020, George Floyd’s killing and the subsequent wave of protests became potentially the largest movement in American history, the sudden growth of which relied on a wave of anger and grief at the police homicides Americans are continually greeted with on the news. Opinion columnists, activists, lawmakers, and even the president of the United States (current and former) have weighed in on these protests and what the appropriate policy changes should be. But first, it’s important to grapple with how the protests have already changed policing.

From 2014 to 2019, Campbell tracked more than 1,600 BLM protests across the country, largely in bigger cities, with nearly 350,000 protesters. His main finding is a 15 to 20 percent reduction in lethal use of force by police officers — roughly 300 fewer police homicides — in census places that saw BLM protests.

Campbell’s research also indicates that these protests correlate with a 10 percent increase in murders in the areas that saw BLM protests. That means from 2014 to 2019, there were somewhere between 1,000 and 6,000 more homicides than would have been expected if places with protests were on the same trend as places that did not have protests.

Campbell’s research does not include the effects of last summer’s historic wave of protests because researchers do not yet have all the relevant data.

I’ve got the relevant data.

The main difference between the Ferguson Effect of the First Era of BLM of 2014–2019 and the Minneapolis Effect of the Second Era of BLM of May 25, 2020–? is that the Ferguson Effect tended to be more localized to where BLM triumphed politically (e.g., it emerged first in St. Louis after Michael Brown’s death, then in Baltimore in April 2015 after Freddie Gray’s death, then in the winter of 2015–2016 in Chicago after video of Laquan MacDonald’s death was released). In contrast, the Minneapolis Effect has been much more national and thus even larger.

… The good news is that even if Campbell’s finding about the increase in murders following BLM protests holds up to further scrutiny, the effect doesn’t appear to last for long. By year four, Campbell no longer observes a statistically significant increase in murders, indicating that whatever is going on with murders is hopefully not long term.

Yeah, what appears to have stopped the 22.9% rise in murders nationally in the last two years of the Obama Administration, was, after the Dallas and Baton Rouge BLM massacres of cops in July 2016, the election of Donald Trump and his selection of Jeff Sessions as Attorney General. Meanwhile, the Establishment chose to downplay BLM’s grievances after Dallas and Baton Rouge.

But then thinking that BLM was needed to beat Trump, the Establishment blasted BLM’s anti-white hate rhetoric via their Media Megaphone from May 2020 onward during the so-called Racial Reckoning that saw blacks shoot each other in very large numbers, and almost cost Joe Biden the election.