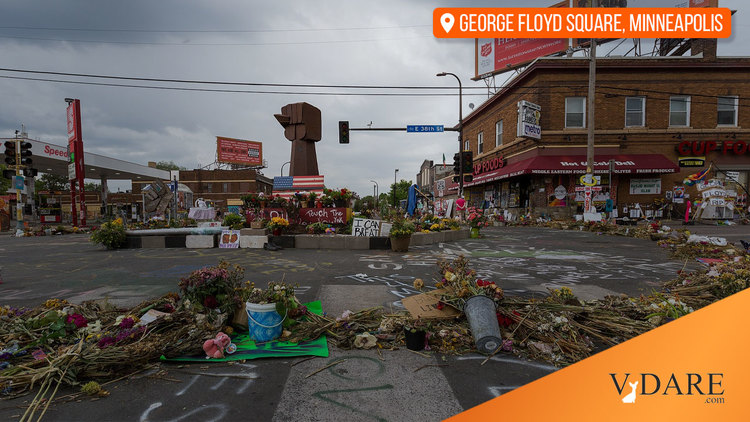 Earlier: NYT News Section: Hey, Remember Those Mostly Peaceful Protests in Minneapolis in May? Well, Actually, They Were Mayhem

So what’s life like near George Floyd Square in Minneapolis, underneath the monument to Black Lives Matter (a raised Black Power fist)?

Since the death of George Floyd, the sound of gunfire has become common in the area surrounding 38th Street and Chicago Avenue, or George Floyd Square. Above, the raised fist memorial can be seen in the square, which is blocked to traffic.

As neighbors of 38th Street and Chicago Avenue, also known as George Floyd Square or the autonomous zone, we are witnessing a revolution by day and a devolution by night.

Prayer gatherings canceled. Rallies canceled. Visitors arriving with flowers in hand, only to retreat to their cars when greeted by the sound of gunshots. Neighbors ducking for cover behind our houses, children in tow.

The spiritual health of our community, the feeling of being connected to something larger than ourselves, is collapsing.

Here’s an account of some of the events of the past 10 days, on one block adjacent to George Floyd Square, where police are met by hostile groups when responding to our repeated 911 calls:

March 6, 5:45 p.m.: A 30-year-old volunteer is killed in the zone by gunshot. People in the zone are seen picking up shell casings and throwing them into city garbage, loading the gunshot victim into a car to drive him to hospital.

March 7: Six garages along our alley are hit by gunfire, one with its owner inside. A car crashes through a fence into a family’s backyard. An 18-month-old had been playing by the fence minutes earlier.

5 p.m.: Thirty shots hit cars and the windows and siding of at least one house, narrowly missing residents watching TV. Parents and children out biking and walking on a sunny day duck behind houses, children watch bullets kicking up dust in the street. A zone leader visits a bullet-riddled house to comfort the family while others from the zone are observed picking up shell casings behind her.

March 8, 2:30 p.m.: Multiple shots fired, a man is photographed perched atop Cup Foods with an assault rifle on a tripod. Children cry. Zone medics are offered to visit neighbors and provide mental health support to those being traumatized.

9:50 p.m.: Thirty shots ring out. A person complains to a neighbor that the neighbor has parked too close to the person’s car. A zone occupant, with no connection to the other parties, fires multiple shots into the neighbor’s car and house. The neighbor, a military veteran, is in the driver’s seat and recognizes an assault rifle with a 30-round clip. The shooter walks back into the zone. Four police squads caravan through and meet the neighbor nearby.

10:16 p.m.: A second 911 call provides a description of the shooter, who remains in the area appearing to wait for some target. Police have just received a call about a teen and adult shot two miles away. Resources exhausted, the police do not respond to our call. The shooter in the zone walks away.

The neighbors ask if they are “zone security” and are told no — but one man reports he has his gun. Neighbors ask how to protect themselves and are told the best thing to do is fill the street corners with garbage containers to block off our streets.

While a neighbor is reporting the abandoned car, she observes a group of well-dressed people being followed by reporters. The neighbor walks into the zone to find attorney Benjamin Crump and the family of George Floyd with Minneapolis City Council Vice President Andrea Jenkins. They are greeting businesses owned by people of color who are being impacted by the loss of business in the zone. They inform the group that they are giving $500,000 to the business owners. Two more vehicles with no plates or temporary stickers pass by driving inside the zone.

9:15 p.m.: Thirty shots from inside the zone. One police squad car arrives.

10:20 p.m.: Shooting suspects from another part of the city drive at high speed down our street with multiple squad cars chasing them, along with a helicopter. Fleeing vehicle blows through stop signs and lights. They eventually enter the zone and surrender as a group of zone occupants emerge and shout at the police and each other.

Children are told to go back to sleep.

All of this in honor of a dude who died of a fentanyl overdose while resisting arrest. A fitting denouement for the American Experiment in ignoring race and crime.

Meanwhile, things are continuing to not go so well in Minneapolis: https://t.co/GNx93XSivM