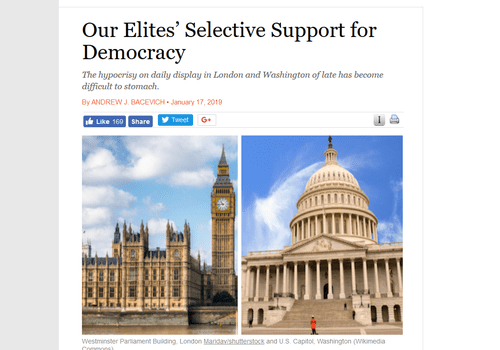 The "Free World" doesn't exist and hasn't existed for a long time [The Liberalism That Isn't, by Costin Alamariu. Daily Caller, September 7, 2017]. The system in the West is closer to a "Managed Democracy" where is the pretense of political opposition, but one faction enjoys immense advantages when it comes to media access, free speech, and even basic protections from law enforcement.

Of course, even when dealing with all that, the faction that is not supported by the System still occasionally scores a victory. When that happens, the democratic pretense is dispensed with entirely.

The Donald Trump campaign is one example, which is why you see the Deep States trying to block every single one of his policies. Another is Brexit, which is why the political system in the United Kingdom is essentially trying to render Brexit meaningless.

Andrew Bacevich calls this "Selective Democracy" in a new article in The American Conservative.

In both, the outcome of what was a manifestly democratic process confounded elite expectations. What happened wasn’t supposed to happen. In a few short months, the onward march towards a multicultural society and an integrated global order, with well-refined products of a carefully vetted and suitably diverse meritocracy pulling the strings, had been stopped in its tracks...

In a recent op-ed denouncing Brexit, New York Times columnist Roger Cohen wrote, “A democracy that cannot change its mind is not a democracy.” Let’s unpack that. What Cohen really means is this: when a democracy comes to a decision of which I disapprove, there’s always room for a do-over, yet when decisions win my approval, they become permanent and irreversible. So just because Americans elected a president who promised to withdraw from NATO and overturn Roe v. Wade doesn’t mean that such possibilities qualify as worthy of consideration. NATO membership is forever. So, too, are abortion rights.

It is no doubt true that the United Kingdom and the United States are democracies, with the people allowed some say. But to be more precise, they are curated democracies, with members of an unelected elite policing the boundaries of acceptable opinion and excluding heretics.

The most important of the above is how an unelected elite "[polices] the boundaries of acceptable opinion and [excludes] heretics." This leads to a huge chilling effect across the entire political spectrum. It even leads to conservatives censoring themselves.

I'd like to tell TAC that I agree with the piece via Twitter. But VDARE isn't in The American Conservative's zone of "acceptable opinion." We're blocked by them on Twitter [Politely ask them why.] Guess that makes us heretics!