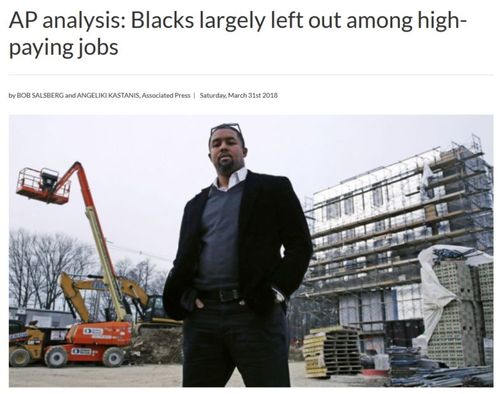 The anniversary of Martin Luther King's death is the occasion for a lot of hagiography, as well as a lot of blaming of whites for blacks' post MLK lack of progress. This is from the AP a couple of days ago:

Jonathan Garland’s fascination with architecture started early: He spent much of his childhood designing Lego houses and gazing at Boston buildings on rides with his father away from their largely minority neighborhood.

But when Garland looked around at his architectural college, he didn’t see many who looked like him — there were few black faces in classroom seats, and fewer teaching skills or giving lectures.

“If you do something simple like Google ‘architects’ and you go to the images tab, you’re primarily going to see white males,” said Garland, 35, who’s worked at Boston and New York architectural firms. “That’s the image, that’s the brand, that’s the look of an architect.”

And that’s not uncommon in other lucrative fields, 50 years after the Rev. Martin Luther King — a leader in the fight for equal-employment opportunities — was assassinated.

If you don't know how the two things—black architects and MLK—are connected, it's this—since blacks and whites have exactly the same aptitudes and interests, the shortage of black architects is caused by racism. So, obviously, is any criticism of MLK. On the other hand, what isn't caused by racism? Here's VDARE.com's coverage of the history involved, going back almost 20 years.