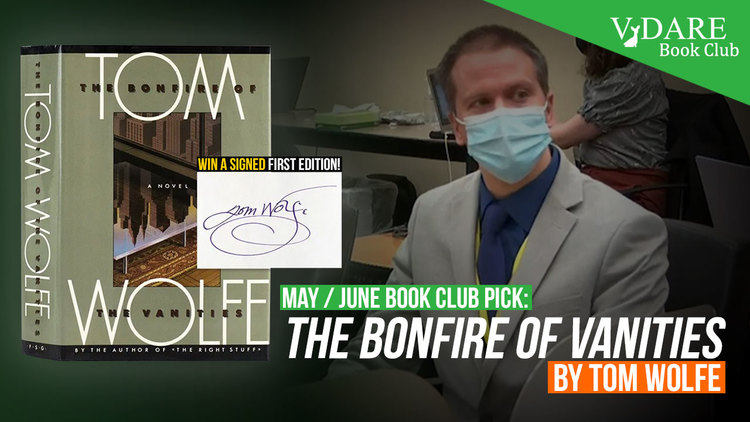 Earlier (2013) by Steve Sailer: The Hunt For The Great White Defendant: A Reading List

For our May-June choice, the VDARE.com Book Club will be discussing Tom Wolfe’s The Bonfire of the Vanities. Join here before May 7th to be included in our raffle for a First Edition signed copy! Our winner will be announced and discussion questions posted Friday, May 7th.

The morning after the Chauvin conviction, we opened the email bag to find this short note from a friend “Time to read The Bonfire of the Vanities.”

Written in 1987, Tom Wolfe’s novel named the “mania for the Great White Defendant”—the hunt for a white, preferably man (although white women may also qualify), with reckless disregard for evidence or obvious demographic trends.

To quote directly from the book:

An assistant D.A. in Major Offenses has started calling Abe Weiss “Captain Ahab,” and now they all did. Weiss was notorious in his obsession for publicity, even among a breed, the district attorney, that was publicity-mad by nature. …

Every assistant D.A. in the Bronx … shared Captain Ahab’s mania for the Great White Defendant. For a start, it was not pleasant to go through life telling yourself, “What I do for a living is, I pack blacks and Latins off to jail.” It wasn’t that it was morally wrong … It was that it was in bad taste. So it made the boys uneasy, this eternal prosecution of the blacks and Latins.

… The press couldn’t even see these cases. It was just poor people killing poor people. To prosecute such cases was to be part of the garbage collection service, necessary and honorable, plodding and anonymous.

Captain Ahab wasn’t so ridiculous, after all. Press coverage! Ray and Jimmy could laugh all they wanted, but Weiss had made sure the entire city knew his name. Weiss had an election coming up, and the Bronx was 70 percent black and Latin, and he was going to make sure the name Abe Weiss was pumped out to them on every channel that existed. He might not do much else, but he was going to do that.

“…in his 1995 book, Overcoming Law, judge Richard A. Posner retracted his initial dismissal of Wolfe’s novel:

The Bonfire of the Vanities has turned out to be a book that I think about a lot, in part because it describes with such vividness what Wolfe with prophetic insight (the sort of thing we attribute to Kafka) identified as emerging problems of the American legal system … at a bizarre intersection of race, money, and violence, an intersection nowhere better depicted than in The Bonfire of the Vanities, even though the book was written before the intersection had come into view.

For our email friend, in good company with many shocked but silent others, the Derek Chauvin case represents the unnerving climax of this intersection. We are all Derek Chauvin, and Captain Ahab has finally found his man.