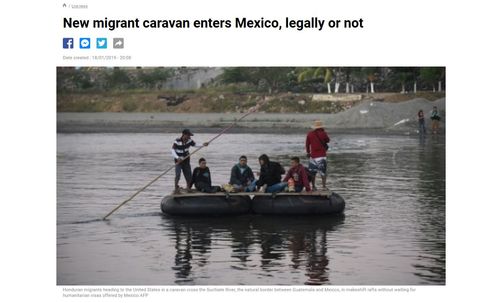 Vanguard Of The New Caravan Enters Mexico, Some Legally, Some Illegally

The vanguard of the latest caravan has entered Mexico, entering the Mexican state of Chiapas, which borders Guatemala.

According to Mexico's Excelsior:

The migrant caravan, composed of Hondurans, Salvadorans, Nicaraguans and Guatemalans, entered Mexico in a legal and orderly manner, and applied for a visitor's permit for humanitarian reasons. According the INM [Mexican immigration bureacracy], the group was composed of 969 adults and 145 children and adolescents.

So they are now in Mexico, where they were warmly received.

Some 500 Honduran migrants were the first to arrive to the Rodolfo Robles border bridge, of the municipio of Suchiate, in Chiapas, around midday. They approached the migratory authority and presented their ID cards to register. In contrast to this past 19th of October, the Mexican government did not close the border crossing and the migrants stayed peacefully place, waiting to be attended....they took the personal information of each one, and a photograph...the authorities  registered them into  the system...their biometric data was taken. Then they were taken to a shelter installed in a local soccer field, where they received food, medical and psychological attention....The local Secretary of Health, Jose Manuel Cruz Castellanos, reported that 156 doctors, nurses, vaccinators, social workers, nutritionists, psychologists, bio-pharmaceutical chemists, sanitation inspectors and maintenance personnel were made available, and three mobile medical units and an ambulance were installed.

A Salvadoran diplomat is encouraging his countrymen to enter Mexico legally.

..., Antonio Zucar, the consul of El Salvador in Tapachula [city in Chiapas] exhorted his fellow Salvadorans to accept the regularization of their entrance into Mexican territory.

Things went orderly at the Rodolfo Robles bridge. However, elsewhere....

Hundreds of Central Americans entered Mexico illegally as the latest migrant caravan to set its sights on the United States began crossing the Mexican-Guatemalan border en masse Friday [January 18th]. Not content to wait five days for the humanitarian visas Mexico is offering them, several hundred migrants took to make-shift rafts to cross the Suchiate River, which forms the frontier, or snuck across the loosely guarded border bridge overnight, AFP correspondents said.

By the way, according to the Mexican government there are 370 crossing points where Central Americans cross into Mexico illegally. So there are plenty of routes into the country.

Around 2,000 migrants are traveling in the latest caravan -- smaller than the one that swelled to 7,000 migrants late last year, leading Trump to warn of an "invasion" by "criminals" and "thugs" and send thousands of troops to the US-Mexican border. Mexican authorities are urging the migrants to cross the border legally and offering expedited "visitor cards" that let them work and access basic health care in Mexico. So far, 969 migrants from Honduras, El Salvador, Guatemala and Nicaragua have been registered under the program and given bracelets that they can exchange for visitor cards in five days.