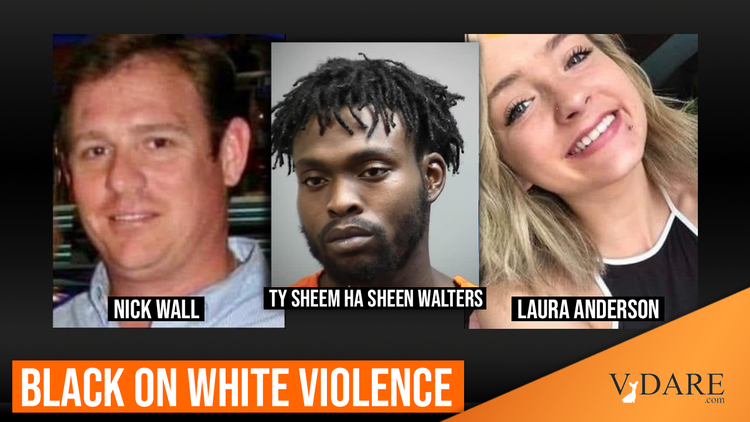 From WBTW.com in South Carolina, a sample size of one:

GEORGETOWN, S.C. (WCBD) – A crash Monday afternoon led to the fatal shooting of a man and his stepdaughter in Georgetown.

Deputies say an altercation occurred shortly after the crash on Highway 521 and Indian Hut Road near Andrews. The fight resulted in three people being shot – two of whom later died. The third victim, a man who stopped to help, survived the shooting.

Nick Wall and his 21-year-old stepdaughter, Laura Anderson, died at the hospital – Wall died at Georgetown Hospital while Anderson died at the Medical University of South Carolina. …

The outpouring the family has received from friends and loved ones helps. “It just means so much to know that these two people touch so many lives.”

The suspect, Ty Sheem Ha Sheen Walters of Moncks Corner, ran into the woods after the shooting but was later apprehended for the killings, according to police. Walters is facing two charges of murder and one charge of attempted murder.

My question is whether this kind of thing is happening more in our Summer of George than in previous years when the media didn’t bellow quite so loudly about the badness of whiteness.

Clearly, blacks have been shooting blacks more since Memorial Day — there are just so many black on black shootings that it shows up in a variety of statistical sources already.

But what about black on white attacks? The good news is that those are usually not too common. Whites don’t socialize much with the kind of blacks who might shoot up a barbecue, and blacks don’t engage in armed robbery as much as in the old Central Park Mugger era: e.g., the mugging-murderer of the Columbia coed in Morningside Park last year was more the kind of thing you saw in the 1970s than in the 2000s.

But perhaps this relatively happy state of affairs is coming to an end due to the Establishment inciting blacks to violently hate whites?

Can anybody think of a data source / methodology to check to see if anything worse than normal is going on this summer in terms of interracial violence, rather than just wait for the FBI to finally release 2020 crime stats in September 2021?