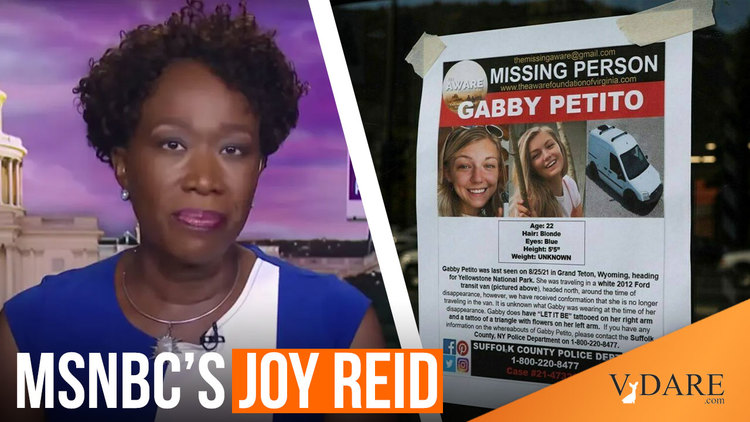 Two Factors Drive “Missing White Woman Syndrome”—The Peacefulness Of White Life, And The Taboo On Covering How Bad Things Are In Black Neighborhoods

When the sensational disappearance of Gabby Petito kept repeating on the radio and internet news, I supposed that it was emotional chaff to distract us from whatever evil the ruling class was doing next. I still think that, but now a writer named Biba Adams has jumped in to distract from the distraction with a diagnosis: Joy Reid calls out 'Missing White Woman Syndrome' amid Gabby Petito case.

Here’s the clip of Joy Reid saying this:

Now, just to be clear, I deeply sympathize with any family that has had a loved one go missing, whatever the race of the missing person. My rational side prompts a question, though. What are the stats on missing persons by race? It turns out that in 2020, the breakdown was as follows:

These numbers were about what I expected. Becoming a missing person is a greater risk for those who live among criminals and psychopaths, a condition more common in, but by no means limited to, the lower socioeconomic strata. Drug addiction, mental illness, or simply a bad choice of mate, can cause people to vanish. (Not all missing persons later turn up dead, like Gabby Petito—many are “Wilful Missing,” people who’ve left their families or jobs for reasons of their own. ) Blacks excel in every index of social dysfunction, and going missing is no exception.

You might think that women, as a supposed victim group, would be more likely to come to some grim and unknown fate, but the actual numbers are:

The over-21 data probably reflect the male propensity for risky behavior.

Wikipedia, always a reliable source of approved views, has a long entry for Missing White Woman Syndrome, which lists a number of illustrative cases. Interestingly, the first two involve “a 17-year-old new noblewoman murdered by her lover, 30-year-old Crown Prince Rudolf of Austria” and “a 21-year-old Danish circus performer killed by her married, 34-year-old Swedish aristocrat lover after eloping with him.” Other examples include a dismembered and mutilated 23-year-old, an 11-year-old abducted and held captive for 18 years, the 7-year-old murdered by a sex-offender neighbor (the inspiration of “Megan’s Law”), and a 27-year-old model and former cheerleader. If there were transsexual Siamese twins abducted by Argentine Nazis, they too would have made the top ten.

To anyone not completely addled by blackety-blackism, these high-profile cases look like the standard run of media sensationalism. High society, celebrities, sexy models, and horror stories are the life blood of the paparazzi. Sorry, Biba, but what they’re gabbing about is not driven by race. It’s not all about not being all about you.