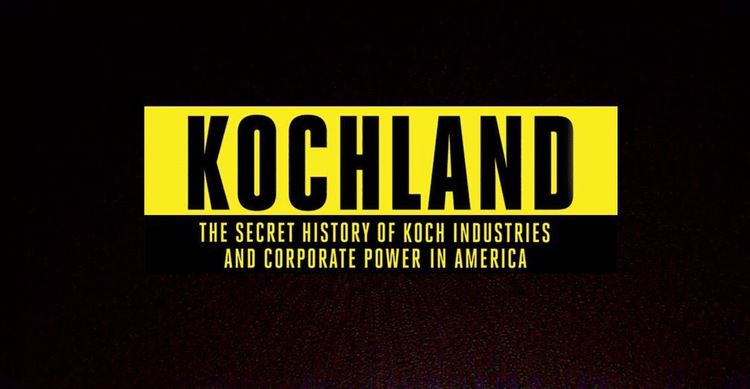 Is it reasonable to think that the principles of engineering and global economics alone are an adequate basis for running a complex modern nation, particularly this one? Apparently the Koch Brothers have such a philosophy and their millions of dollars in political donations to Republican candidates have shaped the party’s behavior for years.

Unfortunately, the Kochs are no friends of borders or national sovereignty, and Republicans’ failure to enact any restrictionist measures when they owned both the House and Senate in 2016-18 is due in part to the power of Koch money.

Tucker Carlson discussed the influential Koch brothers earlier this summer, noting that “the border is more porous than ever. . . you can thank the Kochs for that.” 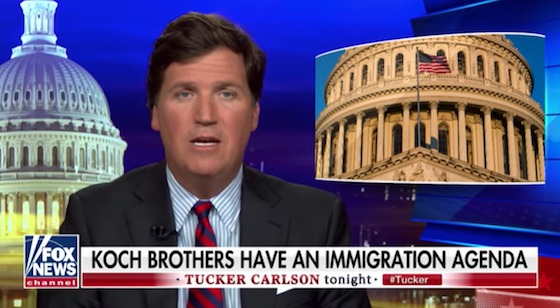 On Wednesday, Tucker returned to the Koch topic, interviewing Christopher Leonard, author of the new book Kochland: The Secret History of Koch Industries and Corporate Power in America:

TUCKER CARLSON: For years, brothers, Charles and David Koch have been the two single most important donors on the American right. They’ve reshaped the Republican Party, according to their personal ideology. They made the party far more libertarian, much more pro-immigration, and more pro-Big Tech.

Even if the Republican Party has evolved and elected Donald Trump, the Koch brothers remain tremendously influential, more than you may understand. And if you’re frustrated, watching the party ignore what its own voters want, it is part of the reason.

Well, there is a new book out that takes a very close look at the Koch business and political empire. Chris Leonard is the author of it. It’s called “Kochland: The Secret History of Koch Industries and Corporate Power in America.” We just spoke with him. Here’s what he said.

CARLSON: So for my perspective — my interest is the political activities of the Kochs who by the way, I can say, since I know them, are very nice people, personally.

CARLSON: But there’s a misconception in Washington that they’re conservative. Tell me what you discovered about their ideology after writing this book. Are they conservatives?

LEONARD: Well, you know, I think you’ve gotten it exactly right, in the sense that they’re not traditional conservatives, as you might think of that today.

Charles Koch is an engineer and you’re right, he is a really nice guy, I interviewed him for this book, I’ve been around the people who have worked for him for decades. Charles Koch believes he’s found the blueprint for how to organize society.

And I think Charles Koch sees his political ideology in that way. He believes that the only way you can structure society is as a market. And when the government intervenes, it ultimately does more harm than good in his view. It causes more problems than it solves.

CARLSON: So our viewers can assess what they think of their views. I do bet that most of our viewers disagree with them on immigration. They’ve been strong advocates, I would say for opening the borders. How powerful are they — the Koch brothers and Charles Koch — particularly within the Republican Party, would you say?

LEONARD: Extremely powerful. You nailed it at the beginning. Charles Koch has been patiently executing a political project since the mid-1970s, and that is to make America more libertarian and his goal in that, his primary goal has been to reshape the Republican Party.

And particularly since the 2000s, you’ve seen the Koch network writ large, which is a multifaceted machine that includes a grassroots group of people called Americans for Prosperity. It includes one of the largest corporate lobbying shops in the United States. It includes a constellation of think tanks here in Washington.

All of these resources have been put to bear to shift the Republican Party more toward what Charles Koch would call a classical liberal ideology, totally libertarian, basically moving the federal government back to the size it was in 1776.

CARLSON: So you’ve seen from the various Koch organizations, some of which you just listed recently, this line that we really don’t have anything to fear from Big Tech, that Republicans are being hysterical conservatives. This show for example, being hysterical about Google or Facebook, just calm down, everything is totally fine.

LEONARD: So this is all part of the bigger picture in my view, and we have to go back to when Trump won the election and surprised the entire political landscape of America.

CARLSON: Which you described in this book, which I would recommend to our viewers, are people who care more about ideas than outcomes, who really are ideologues in the classic sense of that term, and you know, maybe that’s appealing to people, and we will let viewers make up their own minds.

But this is an interesting book, “Kochland: The Secret History of Koch Industries and Corporate Power in America.” Thank you very much, Chris.