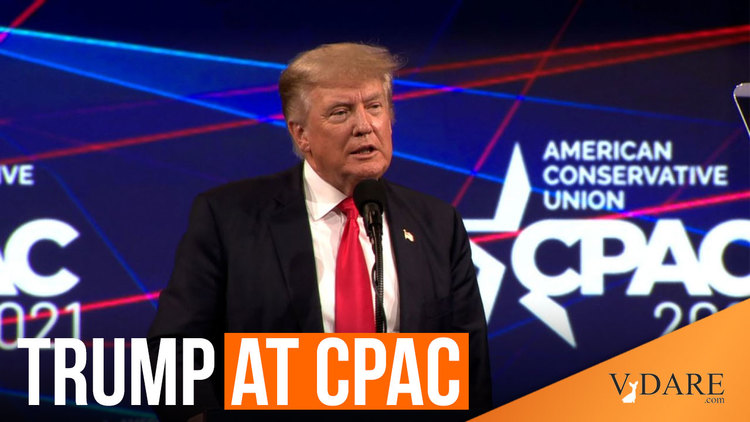 Trump in his speech at CPAC mostly talked about his accomplishments in closing down illegal immigration, Stay In Mexico, and so on, things the Biden Administration is destroying...along with America, of course.

But as with his Sarasota speech, he mentioned "Chain Migration", which is mostly a characteristic of LEGAL immigration. After condemning the Biden Administration's crazy idea of reuniting families by flying in illegals from Central America, Trump said:

You come in illegally and we'll also bring your mother your father, your grandparents, your brothers, your sisters, your aunts your uncles, anybody else want to come in, come on in.

And he killed many and he maimed many. People go out because they want to put themselves in shape, and they end up going back home missing a leg, missing a couple of arms, or dead. That's what happened. And he had the right to bring people in with him, his family, his mother and father and his brother. And he had many that he brought in, but we took very good care of him.

What he's talking about is the 2017 ramming attack on New York bicyclists by Sayfullo Habibullaevich Saipov, which killed eight people, and injured eleven, with

Saipov was a legal immigrant immigrated under a Diversity Immigrant Visa in 2010, and is a permanent  resident with a green card, although if he ever gets out of prison, that may be revoked.

That last one, by Steve Sailer,  quotes (a) a New York Times article where they claimed to have no idea what Trump was talking about and (b) this Daily Mail story:

This is interesting, because he was right at the time that both the Diversity Visa and Chain Migration are legal immigration programs that if stopped, would benefit America.