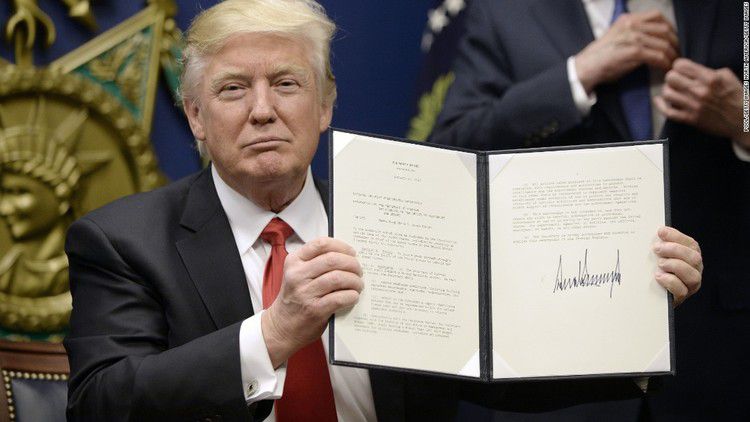 Saturday’s New York Times front-paged a story about the Trump administration considering a decrease in the number of refugees admitted, with the newspaper headline reading U.S. Discusses a Plan Barring Most Refugees. A genuine reduction would be a sensible move, considering how much victimhood, real or fake, has blossomed into a top excuse for entrance into the United States.

There are probably billions of hard-luck stories on planet earth, and if America increasingly becomes seen as the world’s welfare office, the demands for admittance will never end. It seems that way already, for example when thousands of Africans are coming here to steal a better life rather than closer-to-them Europe.

Below, Trump advisor Stephen Miller is a popular target for immigration maximalists in the press. 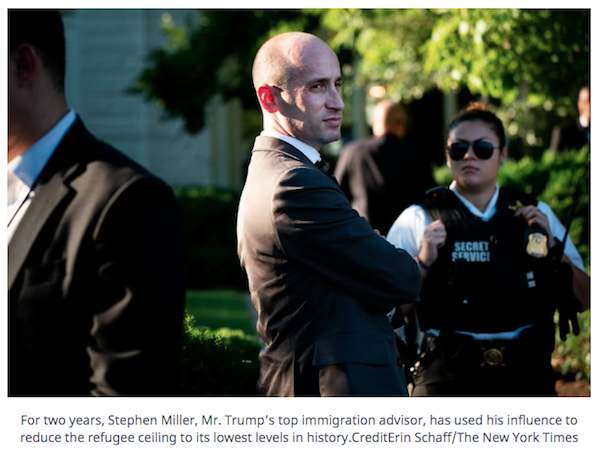 There’s apparently no net reduction in aliens contemplated, just a category readjustment: The Times article notes that “because of a recent surge of asylum seekers at the southwestern border, there was less of a need for the United States to accept refugees from abroad.”

A real reduction in the rescue project would be a plus for the world. The refugee/asylum complex in fact does little to reduce the total amount of suffering on a planet with over 7.7 billion residents, while if more people stayed home and fought for reform, some genuine progress might be made.

Much of official Washington sees no problem with surrendering sovereignty in order to be the planet’s free rescue service. In one example, Senator Rubio suggested recently that the estimated 60,000 Bahamians living in the US be allowed to bring their relatives here. Hurricane Dorian was devastating, no question, but the Bahamas was formerly a British colony until it became a member of the Commonwealth in 1973; it has no political or historical connection to the US at all. There is no reason why we should rescue a substantial portion of its population of over 390,000 persons.

The Times article was reprinted in the link following:

WASHINGTON — The White House is considering a plan that would keep most refugees who are fleeing war, persecution and famine out of the United States, significantly cutting back a decades-old program, according to current and former administration officials.

One option that top officials are weighing would cut refugee admissions by half or more, to 10,000 to 15,000 people, but reserve most of those spots for people from a few countries or from groups with special status, such as Iraqis and Afghans who work alongside American troops, diplomats and intelligence operatives abroad. Another option, proposed by a top administration official, would reduce refugee admissions to zero, while leaving the president with the ability to admit some in an emergency.

Both options would all but end the United States’ status as a leader in accepting refugees from around the world.

The issue is expected to come to a head on Tuesday, when White House officials plan to convene a high-level meeting to discuss the annual number of refugee admissions for the coming year, as determined by President Trump.

“At a time when the number of refugees is at the highest level in recorded history, the United States has abandoned world leadership in resettling vulnerable people in need of protection,” said Eric Schwartz, the president of Refugees International. “The result is a world that is less compassionate and less able to deal with future humanitarian challenges.”

For two years, Stephen Miller, Mr. Trump’s top immigration adviser, has used his considerable influence in the West Wing to reduce the refugee ceiling to its lowest levels in history, capping the program at 30,000 this year. That is a more than 70 percent cut from its level when President Barack Obama left office.

The move has been part of Mr. Trump’s broader effort to reduce the number of documented and undocumented immigrants entering the United States, including numerous restrictions on asylum seekers, who, like refugees, are fleeing persecution but cross into the United States over the border with Mexico or Canada.

Now, Mr. Miller and allies from the White House whom he placed at the Departments of State and Homeland Security are pushing aggressively to shrink the program even further, according to one senior official involved in the discussions and several former officials briefed on them, who spoke on the condition of anonymity to detail the private deliberations.

White House officials did not respond to a request for comment.

John Zadrozny, a top official at United States Citizenship and Immigration Services, made the argument for simply lowering the ceiling to zero, a stance that was first reported by Politico. Others have suggested providing “carveouts” for certain countries or populations, such as the Iraqis and Afghans, whose work on behalf of the American government put both them and their families at risk, making them eligible for special status to come to the United States through the refugee program. (Continues)