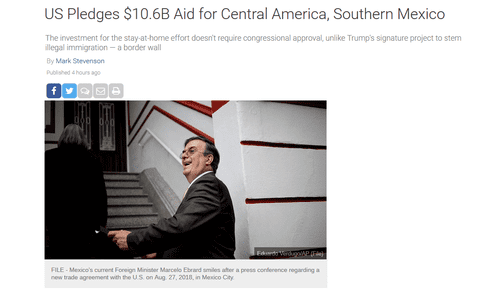 Trump Administration To Give Ten Billion Dollars To Mexico And Central America. And They Can't Build A Wall?

The Trump administration just announced that it will give ten billion dollars (for starters) in aid to Mexico and Central America.

Why is that so easy when it's so difficult to get the wall built?

Think about it. This aid money to Mexico and Central America is being disbursed so quickly and easily, but for nearly two years the Trump Administration has been dithering on the wall. And the wall was his signature campaign promise.

President Trump, this is not how to retain your base. It's certainly not how to save the country.

The United States pledged $5.8 billion in aid Tuesday [December 18th] for strengthening government and economic development in Central America, and another $4.8 billion in development aid for southern Mexico. The U.S aid aims to promote better security conditions and job opportunities as part of a regional plan to allow Central Americans and Mexicans to remain in their countries and not have to emigrate.
US pledges $10.6B aid for Central America, southern Mexico
(Mark Stevenson, AP, Dec. 18, 2018)

I understand the logic here – if these countries are more prosperous people won’t emigrate. A certain percentage wouldn't.

But as long as (1) salaries are higher in the U.S., and (2) It’s relatively easy to get in, I think that many of them will still migrate. Especially in the interim period in which we are waiting for southern Mexico and Central America to become prosperous.

By the way, how long would that take?

And in the meantime, what happens to our border?

The plan was announced in a joint U.S.-Mexican statement released by the State Department and read aloud by Mexican Foreign Relations Secretary Marcelo Ebrard in the Mexican capital. “In sum I think this is good news, very good news for Mexico,” Ebrard said.

Ebrard, the new Foreign Minister, is a sharp guy, and could possibly be the next President of Mexico.

Newly inaugurated President Andres Manuel Lopez Obrador waxed poetic about the plan to provide jobs so people won’t have to emigrate. “I have a dream that I want to see become a reality ... that nobody will want to go work in the United States anymore,” Lopez Obrador said at a morning news conference before the announcement.

And then, the agreements with the United States will be so that Mexicans can go to work, that, instead of shutting the door, the door will be open, because Mexicans are going to have work. And they will go there because there will be many jobs, there will be investment, there will be well-being. And this is what is going to help make the country peaceful.
Conferencia de prensa del Presidente Andrés Manuel López Obrador 18 de diciembre 2018
["Press Conference of President Andres Manuel Lopez Obrador, December 18, 2018"]
Mexican Presidential Website, Dec. 18, 2018

Maybe AMLO himself isn't totally clear about what he was saying.

Anyway, back to AP:

The U.S. State Department issued a simultaneous statement saying “The United States is committing $5.8 billion through public and private investment to promote institutional reforms and development in the Northern Triangle,” a term that refers to Honduras, Guatemala and El Salvador.

Since the campaign and now as President, AMLO has been talking about organizing a big international aid program, mostly financed by the United States. See here and here for recent references and here is one from during the campaign.

Lopez Obrador’s administration has said it is also interested in agricultural, forestry and tourism projects in southern Mexico, and the U.S. said it will contribute to those efforts.

This is starting to add up, isn’t it?

The U.S. Overseas Private Investment Corporation “is prepared to invest and mobilize $2 billion in additional funds for projects in southern Mexico that are viable and attract private sector investment,” according to the statement. “This amount is in addition to the $2.8 billion in projects for Mexico through OPIC’s current investment pipeline.”

Say, maybe OPIC could raise money for the border wall?

[Foreign Minister] Ebrard said “The commitments established here signify more than doubling foreign investment in southern Mexico starting in 2019.” Southern states like Chiapas and Oaxaca are home to many of Mexico’s poorest communities. Lopez Obrador, who took office Dec. 1, has sought to make development in that region a priority, including plans for a “Mayan train” stretching from touristy parts of the Yucatan Peninsula down to Chiapas.

I hope that southern Mexico and Central America become more prosperous. That would be good for us too. But, in the meantime, we can't abandon the need for border security in the hopes that they do someday.

Here's the understatement of the year:

It was unclear if Mexico would give anything in return.

A planned announcement about Mexico’s migration policy was postponed until Wednesday [December 19].

I think that if we're giving the Mexicans all this money that's the least they could and should do.

Ebrard had previously suggested about $25 billion in U.S. investment would be an appropriate figure for what Mexicans and Central Americans have dubbed “The Alliance for Prosperity” in the region.

Hmm, $25 billion? Isn't that about what the wall would cost?

Bottom line: If the U.S. has billions of dollars to give to Mexico and Central America, where is the money to spend on the wall?