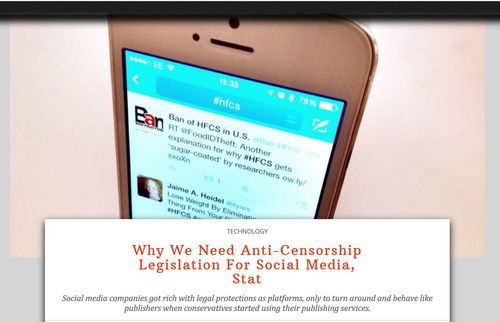 The censorship of Trump supporters by Big Tech is perhaps the greatest threat the president faces in his 2020 re-election bid. "Meddling" by companies such as Google, Twitter, and Facebook is far more serious and insidious than any "disinformation" effort by countries such as Russia. However, besides tweeting about it, President Trump has done very little to combat this censorship.

The recent banning of mainstream conservative Jesse Kelly by Twitter (and his just as mysterious restoration) has intensified talk among even Conservatism Inc. outlets about the need for government action.

It’s not just individuals on social media. Entire social media platforms, including those specifically created to protect the free speech denied on services like Twitter, are now being taken off the Internet...

[T]he problem from social media is not that people are seeing things they don’t want to see, it’s that they are not seeing things they do want to see—particularly if those things are conservative and “controversial.” Now House Republicans are probing whether Dorsey lied in his congressional testimony about that platform’s treatment of conservatives, a show of spine that has been long overdue.

What is needed is an end to the bans, which will only punish the right, and a return to free speech on social media. This could be accomplished quite effectively with a modest number of user-controlled, rather than big-tech controlled, content filters.

But that will not happen unless the government, through Congress and the courts, demand the big tech monopolies oligopolies stop their reign of politically biased censorship, one which sees conservatives attacked with impunity but liberals getting off scot-free or even lauded for harassment. Social media companies got rich with legal protections that proclaimed them only to be dumb platforms, only to turn around and behave like publishers when conservatives started using their platform to share information that they didn’t approve of.

[Why We Need Anti-Censorship Legislation For Social Media, Stat, by Jeremy Carl, The Federalist, November 28, 2018]

[U]nless it’s revised, the agreement will thwart the president’s explicit promises to address social media censorship. Article 19.17 of the USMCA stealthily removes seven words from Section 230 of the Communications Decency Act’s “Good Samaritan” provision, which would give Big Tech the statutory right to censor whatever content it finds “objectionable...”

Congress was clear that its concern was to focus on pornography and obscenity, not political content...

Removing those seven terms would remove the context for “objectionable” and likely lead courts to interpret it to mean whatever the platforms object to -- which has thus far included the word“illegal alien,” pro-life advertisements, videos defending “Israel’s Legal Founding,” and President Trump’s own immigration advertisements...

Silicon Valley giants are trying to have it both ways. They receive special privileges based on being forums for political diversity, while using an exception specifically targeting pornography and obscenity to justify political censorship. Now, they have managed to persuade the Trump administration to try strengthen this double standard and export it to our trading partners.