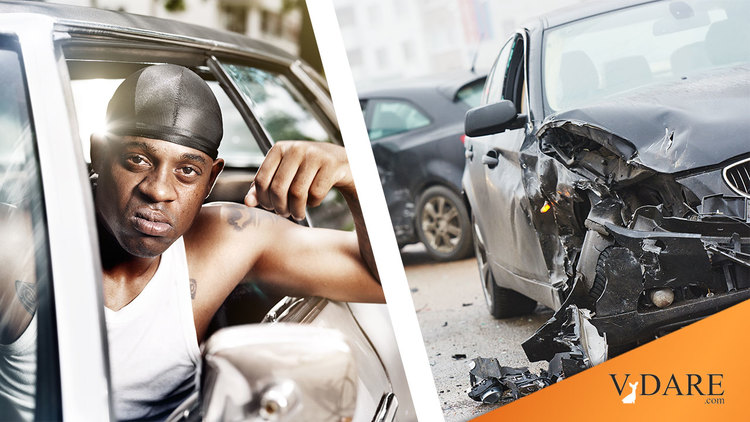 Earlier: The MSM Tries To Explain The Racial Wreckening On The Roads

The U.S. Department of Transportation’s National Highway Traffic Safety Administration today released the Early Estimate of Motor Vehicle Traffic Fatalities for the First Quarter of 2021. NHTSA estimates that 8,730 people died in motor vehicle traffic crashes in the first three months of 2021, a 10.5% increase from the 7,900 fatalities the agency projected for the first quarter of 2020.

These increases in fatalities come even as driving declined; preliminary data reported by the Federal Highway Administration show that vehicle miles traveled (VMT) in the first three months of 2021 decreased by 2.1%, or about 14.9 billion miles. The fatality rates per 100 million VMT for the first quarter of 2021 increased to 1.26 fatalities per 100 million VMT, up from the projected rate of 1.12 fatalities in the same time last year.

When traffic fell with the pandemic, the people left on the roads started driving faster and more recklessly. Then black traffic deaths exploded in June 2020, up 55% over June 2019, as blacks celebrated the racial reckoning by getting themselves killed through bad driving.

The new quarterly report has no breakout of victims by race.

In general, America needs faster reporting of traffic and murder statistics, so that the Establishment can’t double and triple down on their bad ideas, like the racial reckoning, before official reports on the costs begin to trickle in. Right now, it’s as if 2021’s baseball statistics aren’t reported until August 2022, long after all the free agent decisions have been made.