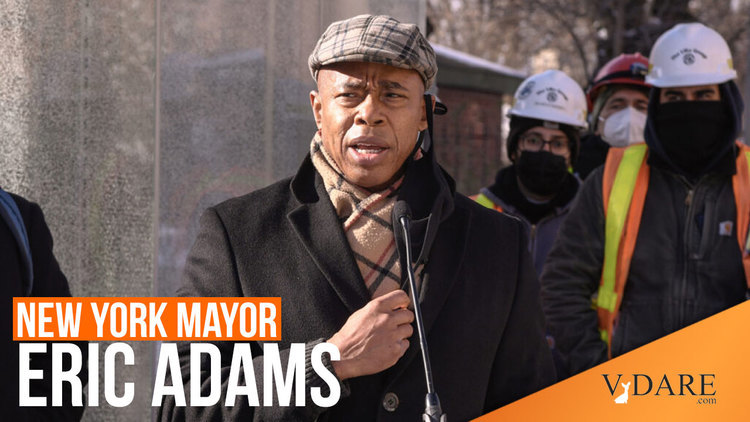 Too Much Personality: NYC Mayor Eric Adams Is Like Trump If Trump Were Also Black, Vegan, And Maybe Gay

One restaurant employee told POLITICO Adams usually dines on fish and salad, even though the mayor claims he’s on a plant-based diet.

By SALLY GOLDENBERG and JOE ANUTA

NEW YORK — Mayor Eric Adams’ whereabouts have long been a source of intrigue — from his unconventional living arrangement that spilled into public view on the campaign trail last year, to his international getaways and thriving nightlife at some of New York City’s swankiest hot spots.

Now Adams has turned a new, upscale Midtown restaurant into his unofficial office — taking meetings just this week at Osteria La Baia with former Gov. Andrew Cuomo and recently-departed Mayor Bill de Blasio, making phone calls in between confabs and generally holding court — all while a close confidante with a checkered past keeps watch over the city’s executive.

That friend is Zhan “Johnny” Petrosyants, a restaurateur who was charged in a money laundering case in federal court eight years ago. He and his twin brother, Robert, were indicted on 11 counts for taking part in a check-cashing scheme that involved medical billing companies. Johnny Petrosyants pleaded guilty to one of those counts and was sentenced to probation and community service, while his brother was sentenced to six months in federal prison. Together with another defendant, they had to forfeit nearly $700,000.

Adams counts Johnny Petrosyants among his closest friends: They talk frequently and spend extensive time together, dining at restaurants and hobnobbing at clubs like the exclusive Zero Bond in Noho. Adams, who sleeps just a few hours each night, sometimes stays at Petrosyants’ Midtown condo in Trump World Tower, according to five people familiar with their habits. Across the Hudson River in Fort Lee, N.J., the two own condos nearly across the street from each other.

A City Hall official described their relationship as a longstanding friendship, and said Adams — who took up residence in Gracie Mansion — does not sleep at Petrosyants’ pad.

… “He has never lived with Johnny, doesn’t have his own space there and hasn’t stayed over at the apartment,” Young added.

… A restaurant employee told POLITICO Adams usually dines on fish and salad, even though the mayor claims he’s a vegan and wrote a 224-page book about his food regimen. “He’s not a vegan, he’s a pescatarian,” said the staffer, who was granted anonymity to speak candidly about the mayor.

Young said the mayor follows a strict, plant-based diet and does not eat fish. But the La Baia employee’s description of Adams menu choices matched that of a meal Adams reportedly ordered at another Manhattan eatery last summer that included broiled fish and spinach, both cooked without oil. Three people who have witnessed Adams eating out said they have seen him dine on fish.

Mayor Eric Adams refuses to admit or deny that he’s gay after a POLITICO report detailed a close relationship he has with another man
There’s a man in Mayor Eric Adams’ life.
By LOUIS FLORES

Mayor Eric Adams (D-New York City) is refusing to speak out about a report published on Saturday by POLITICO, which disclosed details about a “close” relationship he has with another man. The other man, Zhan “Johnny” Petrosyants, was described as a restaurateur with a “checkered past.”

When pressed by Progress New York, the New York City Hall press office would not answer questions about whether Mayor Adams was gay or living “in the closet.”

The innuendo that he’s gay sounds overblown. Perhaps he’s just covering up that he didn’t actually live in NYC when elected mayor, but instead lived with a school administrator girlfriend in New Jersey. It sounds kind of like the rumors that NJ Senator Cory Booker was gay and then there was the counterrumor that he actually lived in Brooklyn with his secret white girlfriend.

But, still… why not? Eric Adams has a big personality, so there’s lots of room for everything in there.