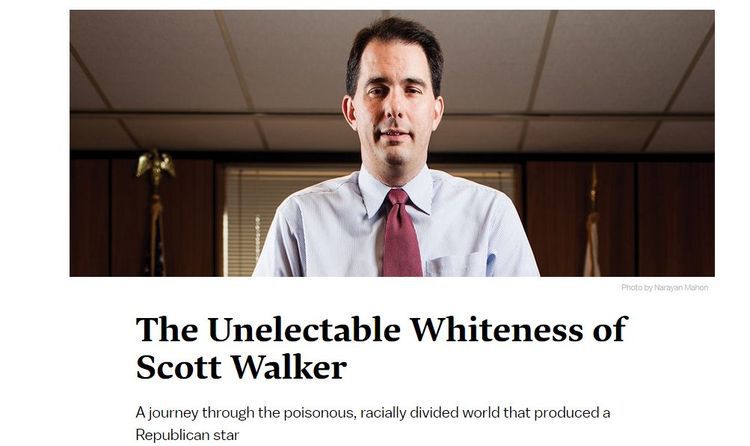 TNR: "The Unelectable Whiteness of Scott Walker"—Nature and Nurture in Wisconsin

Wisconsin may be the state where European social democracy came closest to happening in America. As Alice Cooper helpfully points out in Wayne’s World, “Milwaukee is the only major American city to have ever elected three Socialist mayors.”

But Wisconsin is also where The Reasons Why We Can’t Have Nice Things are most obvious. Wisconsin’s 1970s attempt at McGovern Era social democracy foundered spectacularly on a huge increase in the number of black welfare spongers. Today, Wisconsin is saddled with the lowest scoring blacks in the country on the NAEP test. Liberal Dane County, site of the state government and the U. of Wisconsin at Madison, has the worst racial inequality in the country aggregating across a broad variety of measures

Last year, The New Republic argued that Wisconsin governor (and Presidential possibility) Scott Walker is saddled by “Unelectable Whiteness” due to … well … it’s a little hard for TNR to make clear exactly why, but that’s what I’m here for.

The Unelectable Whiteness of Scott Walker

A journey through the poisonous, racially divided world that produced a Republican star

… Among U.S. cities, Milwaukee has long been an outlier. In the late nineteenth century, it was the most foreign city in the country: By 1890, a mere 13 percent of its inhabitants were the children of American-born parents. For most of the period between 1910 and 1960, the city was governed by Socialist Party mayors. Moynihan’s Law of Proximity to the Canadian Border long protected Wisconsin, allowing progressivism to flourish. Fighting Bob La Follette Sr., governor or senator from Wisconsin from 1901 to his death in 1925, won 17% of the vote in the 1924 Presidential election on the Independent Progressive ticket.

And, as the twentieth century wore on, Milwaukee stood apart for another reason: It remained remarkably and stubbornly white. The Great Migration that had brought some six million African Americans from the South between 1910 and 1930 and in a second wave around World War II transformed just about every major city in the North—except Milwaukee.

And Minneapolis-St. Paul, too.

Few migrants made it past the great sponge of Chicago, in part because there wasn’t a plentiful supply of jobs to entice them: Milwaukee’s labor market was then amply filled by European immigrants and workers from the declining timber and mining industries up north. By 1960, blacks made up nearly a quarter of Chicago’s population and nearly 30 percent of Detroit’s and Cleveland’s. In Milwaukee, they accounted for less than 10 percent of residents, the smallest proportion of African Americans in any of the 15 largest cities in the country.

It wasn’t until the ’60s that African Americans started to drift into Milwaukee in large numbers. For the next 20 years, the city offered safer streets and better schools than Chicago, and its industrial base was faring better than in many other urban areas.

I’ll get to the big reason, which TNR won’t touch, below.

By 1990, Milwaukee’s black population had shot up to 30 percent. Today, it stands near 40 percent, while Hispanics make up another 17 percent.

I can recall visiting Milwaukee in July 1991 (I can pinpoint the date because it was the week Jeffrey Dahmer was arrested in Milwaukee), and being struck that most of the work in Milwaukee seemed to be being done by Mexicans.

This delayed arrival would prove highly consequential. Not long after a substantial African American community took shape, Milwaukee’s industrial base began to collapse and its manufacturing jobs disappeared. This left almost no time for the city to develop a black middle class or a leadership elite.

When I spent a weekend in Milwaukee doing touristy things in 1991, it was striking that a huge fraction of the low end service jobs, like selling hot dogs at the lakefront fairgrounds, were being done by Mexican immigrants rather than by the city’s huge black population.

Within short order, Milwaukee had some of the most glaring racial disparities in the country. Today, it has the second-highest black poverty rate in the United States, and the unemployment rate is nearly four times higher for blacks than for whites. The city had never been exactly welcoming to African Americans—its tight-knit enclaves of Germans, Jews, and Poles had fiercely resisted housing and school integration. But the decline of the black ghetto so soon after many of its residents had arrived made it easier for white Milwaukeeans to write off the entire African American community, or to blame it for the city’s troubles. White flight, like the Great Migration, came late to Milwaukee, but it came fast and fueled with resentment. Between 1960 and 2010, the population of the three formerly rural counties around Milwaukee County (Waukesha, Ozaukee, and Washington, or the “WOW” counties, for short) nearly tripled, to 608,000.

Nah, it was Wisconsin’s generous welfare program, which assumed a German Protestant work ethic was a human universal, that proved so alluring to the laziest people of Mississippi, and encouraged their daughters to subsequently have babies young to get on the dole themselves. Here’s a graph of AFDC from Thomas Corbett’s paper: By 1980, however, AFDC was $444 in Wisconsin versus only $288 in more expensive Illinois. Illinois’ heavily Irish political class had grown cynical about new arrivals from Mississippi, but Wisconsin’s fairly German electorate had longer maintained its faith in humanity. Minnesota, with its similarly naive Scandinavian electorate, offered almost as much as Wisconsin, but Minnesota is colder and more remote, so Wisconsin was the preferred destination.

If you’ve been paying close attention, you’ll know Milwaukee has been notorious for having the worst welfare problem in America for a long time. For example, Jason DeParle’s well-known 2005 book American Dream about the 1990s welfare reform is set in Milwaukee. Here’s Harvard sociologist Christopher Jencks’ review in the New York Review of Books.

If you read between the lines, the TNR article is saying that the national media will eventually be able to nail somebody in Scott Walker’s entourage for saying something insensitive about blacks because … uh … well … okay, to be frank, if you knew how much better Milwaukee was before all these people from Mississippi showed up with their hands out, you’d be insensitive, too.