"Shortly before she moved to Hawaii, Stanley saw her first foreign film. Black Orpheus was an award-winning musical retelling of the myth of Orpheus, a tale of doomed love. The movie was considered exotic because it was filmed in Brazil, but it was written and directed by white Frenchmen. The result was sentimental and, to some modern eyes, patronizing. Years later Obama saw the film with his mother and thought about walking out. But looking at her in the theater, he glimpsed her 16-year-old self. "I suddenly realized," he wrote in his memoir, Dreams from My Father, "that the depiction of childlike blacks I was now seeing on the screen ... was what my mother had carried with her to Hawaii all those years before, a reflection of the simple fantasies that had been forbidden to a white middle-class girl from Kansas, the promise of another life, warm, sensual, exotic, different."

But as I noted in The American Conservative over a year ago, on that same page (p. 125), Obama went on to make much clearer why the incident was so upsetting to his delicate sensibilities:

Years later, when he’s working on Wall Street, he’s creeped out by his visiting mother’s insistence on seeing her favorite film, the 1959 Brazilian art-house classic “Black Orpheus.” He belatedly realizes that his very fair-skinned mother is sexually attracted to dark men. He pompously intones, “The emotions between the races could never be pure; even love was tarnished by the desire to find in the other some element that was missing in ourselves. Whether we sought out our demons or salvation, the other race would always remain just that: menacing, alien, and apart.”

"There is an amazingly candid moment in Obama’s autobiography when he writes of his childhood discomfort at the way his mother would sexualize African-American men. ‘More than once,’ he recalls, ‘my mother would point out: “Harry Belafonte is the best-looking man on the planet.”’"

I suspect he feels that she messed up her life due to naïve faith in Third World countries and Third World men; but if she had been wiser, where would he be? This is one of life’s conundrums that’s hopeless but not serious, and yet Obama can’t help being serious about himself.

Have you seen the Time profile on Obama’s mom? It is a wonderful read-between-the-lines piece.

Sixties black nationalist Michael de Freitas worked in London as a pimp, drug dealer and strong-arm man. Then he reincarnated himself as a black leader called Michael X and started doing away with rivals in his native Trinidad. He was tried and hanged in his native Trinidad for murder in 1975.

One of his victims was Gale Ann Benson, the infatuated, privately educated daughter of a Conservative MP. She was a model and a socialite and was attracted by the aura of danger. Again she bit off more than she could chew.

Her body was found in a shallow grave. She was still alive when she’d been buried.

My correspondent goes on:

It also ended disastrously for a 27-year-old children’s aid worker called Emma McCune. In 1991, she took herself off to a refugee crisis in southern Sudan.

McCune scandalized the relief community by marrying a local guerrilla leader; to whom she became a "First Lady-in-Waiting" 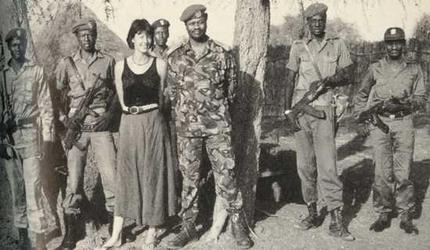 Formerly a champion of children's rights, Emma couldn't stop her husband from holding hundreds of adolescent boys in a squalid camp. According to Wikipedia she embraced the hardships of African life (bouts of malaria, water teeming with bilharzia), she was well-fed by local standards, eating fish that her husband's soldiers had stolen from a weaker, starving tribe.

“They were instantly attracted to one another, and Machar, who already had a wife, proposed on their second meeting a year after the first. After taking up with Machar, including using a UN-supplied typewriter to produce manifestoes, she was fired by Street Kids International. She lived with Machar as war intensified and he split his faction away from the larger movement. At one point they fled a machine-gun attack. In 1993, after becoming pregnant, she moved to Nairobi; she died in a car crash.”

A book about her has been written by Deborah Scroggins called Emma’s War. It was to be filmed by Tony Scott.

By the way, I've finally figured out why the seemingly cosmopolitan Obama grew up so narrowly Afrocentrist in his identity and why he became a politician. It's a pretty funny story rooted in his mother's passive-aggressive war on her poor second husband Lolo's attempts to provide a decent living for her and some other guy's kid, but I'll have to postpone it until I have time to type in more of Obama's endless sentences.