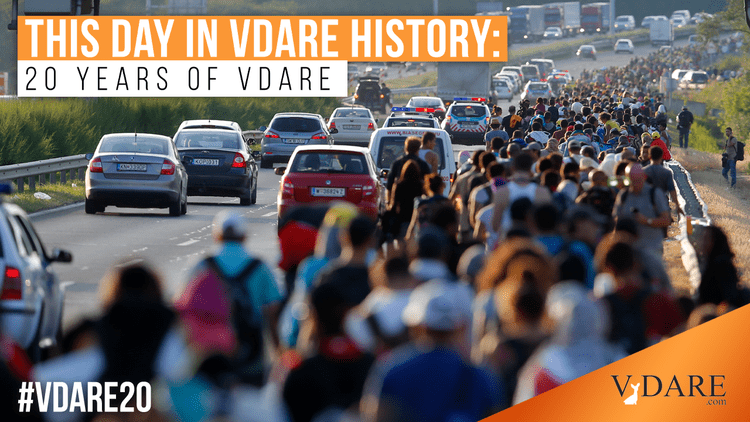 This Day In VDARE.com History, 2015: Europe Faces Summer of Invasion

In the first three months of 2015, Europe saw the arrival of 185,000 illegal aliens, a big uptick from last year’s numbers. The increase is not surprising, because who among the one billion Africans wouldn’t like a better life in first-world Europe with its generous welfare policies? Word has gotten out that if you claim to be a refugee fleeing some war or privation, you may win the asylum sweepstakes. Nobody is punished for engaging in refugee fraud, so they keep coming.

Europe should be defending its people from a true invasion, but is too mentally weakened to understand the national security threat posed by open borders to African and Middle Eastern migrants.

Of course, there are real refugees fleeing brutal wars in Syria and Iraq, but most photos don’t show families but instead reveal boats crowded with young African men. Europe is struggling with unemployment for its own people, so the Africans won’t find the streets paved in gold they desire: anger and social unrest may well result.

Plus the chaos allows easy entry of jihadist Muslims who want to mass murder European infidels. A report from Le Figaro this week said over 1700 suicide bombers are ready to attack France. So Europe doesn’t need to import any more trouble than it already has.

Below, African men disembark from an Italian Navy rescue boat onto the battered island of Lampedusa in late May. 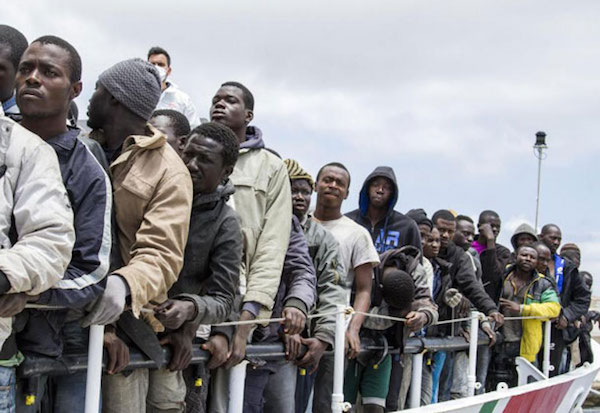 Unsurprisingly, many people don’t want the invasion. In a recent British poll, only 34 per cent said they would welcome refugees, which fell to 29 per cent when asked about refugees from the Middle East. Many Brits think the Australians have the right policy by turning migrant boats away before reaching land.

But instead of facing the demographic tsunami honestly and taking steps to stop the invasion, European leaders squabble over how many thousand each country should take. They should be planning defensive measures but have been too lulled by decades of easy living and diversity propaganda from the left to understand that war is upon them.

In the first three months of this year alone, 185,000 immigrants have sought refuge in Europe.

The number is 86 per cent up on last year and underlines the migration crisis threatening Britain.

Home Office staff accepted 7,300 applications from asylum seekers at a rate of 81 every day, taking the number housed in this country while their claims are assessed to 30,000.

The statistics come amid growing concern about the tidal wave of migrants heading across the Mediterranean to Italy and Greece.

But despite cries from the two cash-strapped countries that they are being overwhelmed by the influx, they accepted just 18,000 applications between them.

The number underlines fears that Greek and Italian border officials are allowing migrants to pass unhindered so they can move on to the UK and other countries to claim asylum.

Alp Mehmet, of MigrationWatch, said: “This huge number doesn’t surprise me. The official figures are catching up with what we already know – numbers are growing massively.

This is why each country simply taking in a few is not going to work. It is the tip of the iceberg and the more we take in the more the iceberg will grow.

“We have really got to think about how we stem the tide.”

Gerard Batten, of Ukip, said: “This massive increase shows that there is a never-ending supply of migrants, whether they are genuine refugees or just economic immigrants coming to the EU.

“Italy and Greece appear to be acting simply as a gateway to more attractive parts of Europe, including Britain.

“The only way to tackle this flood is to stop them at the EU’s borders. If they are allowed to cross into Europe it will serve to encourage many more to come.”

The figures, published by the EU’s statistical wing Eurostat, revealed that 184,815 first-time asylum seekers arrived in the first three months of 2015 – more than 2,000 for each of the 90 days.

It is a massive increase on the same period last year when fewer than 100,000 came.

The jump is doubly surprising coming during winter months when most overland and sea routes are hit by bad weather.

The biggest group of new arrivals were the 48,900 Kosovans fleeing their homeland. Nine out of 10 of those went to just two countries – Germany and Hungary.

The remainder went to Austria or Finland.

Although they are all likely to be refused asylum they are still being housed and fed at taxpayers’ expense while their claims are assessed.

The next largest contingents of would-be refugees were 30,000 Syrians and 13,000 Afghans.

Britain’s 7,335 applications lodged between January and March this year represents a four per cent annual rise and is more than 16 other EU countries combined.

Foreign nationals most likely to claim asylum in Britain came from Pakistan, Eritrea and Syria, according to Eurostat.

Both countries took in around 22,000 Kosovans each. Italy, which has had at least 50,000 migrants land on its southern shores this year, came a surprising third with just over 15,000, revealing just how many are leaving the country before lodging asylum applications.

Greece, which also claims to be struggling under the weight of a similar sized influx, had less than the UK with 2,610.

EU rules state that refugees have to lodge their claims in the first EU country they reach.

Conditions in Greece are so bad that the UK has had to suspend transferring asylum seekers back and now assesses their claims here because Euro judges have ruled doing so would breach their human rights.

David Cameron and Angela Merkel will wrestle over how to cope with Europe’s biggest immigrant influx since the early 1990s at an EU leaders summit in Brussels next week.

Mr Cameron and Home Secretary Theresa May have said they will oppose any attempt by the EU impose a quota on the UK.