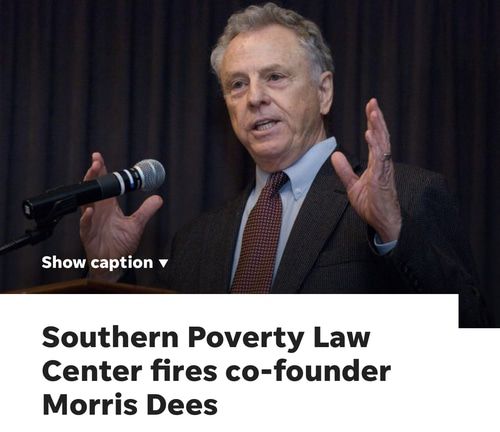 The Truth About the SPLC Was Printed 25 Years Ago. Nobody Cared.

In the wake of rare black Southern Poverty Law Center lawyer Meredith Horton’s alleged allegations that racism and sexism at the SPLC go all the way to the top, leading to the SPLC firing its Face of Hate, Morris Dees, it’s time for the SPLC to add to its list of Hate Groups … the SPLC.

Update: Journalist Jim Tharpe, whose investigation into the Southern Poverty Law Center was ignored 25 years ago, called today for the feds to finally come in and investigate the SPLC.

“I would hope the IRS and the Justice Department would take this as [an] opportunity to come in and take a close look at The Center, it’s finances and it’s day-to-day operations,” … “It’s long overdue.”

With the news today that the SPLC has just fired its co-founder, junk mail genius Morris Dees, for as-of-yet unspecified sins, it’s worth reflecting on how saintly the SPLC’s reputation has been in the Conventional Wisdom, despite numerous hardworking journalists digging up the facts about it.

It appears the rumor is that Meredith Horton, one of the SPLC's rare black attorneys, complained of racism and sexism at the SPLC.https://t.co/yeWkqeDDj3

These complaints about the SPLC's internal racism have been legion for 25 years:https://t.co/OP0UpiXXSq https://t.co/bomWOICy4t

The truth about the nature of the Southern Poverty Law Center has been in print for a quarter of a century, since the Montgomery Advertiser newspaper ran a multipart series summarizing a multi-year investigation of the local institution. But nobody nationally cared and the SPLC went from strength to strength, piling up vast amounts of money (currently about a half billion dollars) and forming alliances with crucial chokepoints in the flow of information, such as Amazon and the New York Times, to deplatform its enemies.

Here are excerpts from a panel discussion at Harvard in May 1999 put on by the Nieman Foundation. The subject is reporting on not-for-profits.

This is the revealing statement of Jim Tharpe, the Deputy Metro Editor of the Atlanta Constitution, about his experience editing a massive Pulitzer-finalist investigative series on the Southern Poverty Law Center during his days at the Montgomery Advertiser:

I’d never done any reporting on nonprofits, I thought they were all good guys, they were mom-and-pop, bake-sale, raise-money-for-the-local-fire-department type operations. I had no idea how sophisticated they were, how much money they raised, and how little access you have to them as a reporter, some of which has already been covered here.

Our series was published in 1995 after three years of very brutal research under the threat of lawsuit the entire time.

Our findings were essentially these:

The [Southern Poverty Law] center was building up a huge surplus. It was 50-something million at that time; it’s now approaching 100 million, but they’ve never spent more than 31 percent of the money they were bringing in on programs, and sometimes they spent as little as 18 percent. Most nonprofits spend about 75 percent on programs.

A sampling of their donors showed that they had no idea of the center’s wealth. The charity watchdog groups, the few that are in existence, had consistently criticized the center, even though nobody had reported that.

There was a problem with black employees at what was the nation’s richest civil rights organization; there were no blacks in the top management positions. Twelve out of the 13 black current and former employees we contacted cited racism at the center, which was a shocker to me. As of 1995, the center had hired only two black attorneys in its entire history.

We also found some questionable fundraising tactics. One of the most celebrated cases the center handled was the case of a young black man, Michael Donald, who was killed by Klansmen in Mobile, Alabama, and his body suspended from a tree, a very grotesque killing. The state tried the people responsible for the murder and several of them ended up on death row, a couple ended up getting life in prison.

The center, after that part of the case took place, sued the Klan organization to which they belonged and won a $7 million verdict. It was a very celebrated verdict in this country. The problem was the people who killed this kid didn’t have any money. What they really got out of it was a $51,000 building that went to the mother of Michael Donald. What the C enter got and what we reported was they raised $9 million in two years using the Donald case, including a mailing with the body of Michael Donald as part of it.

The top center officials, I think the top three, got $350,000 in salaries during that time, and Morris got a movie out of it, a TV movie of the week. I think it was called, “The Morris Dees Story.” [Actually, “Line of Fire: The Morris Dees Story” with, appropriately enough, Corbin Bernsen (who played sleazy lawyer Arnie Becker on “LA Law”) as Morris.]

As I said, being the editor on this series really raised my eyebrows. I never knew anything about nonprofits before this. I thought we would have complete access to their financial records; we didn’t. We had access to 990’s, which Doug mentioned earlier, which tell you very little, but they are a good starting point.

I also learned that there are organizations out there that monitor nonprofits. A couple of these that might be worth your time are the National Charities Information Bureau, the American Institute of Philanthropy, and the Charities Division of the Better Business Bureau. They have rather loose guidelines, I think, for the way nonprofits operated, and even with those guidelines, they had blasted the center repeatedly for spending too little on programs, for the number of minorities in management positions, just very basic stuff that they’d been criticized for but nobody had reported.

The relationship with sources on this story was pretty interesting, because like I said, most of these people were our friends, and as somebody mentioned earlier, these were the disillusioned faithful. They were people who didn’t resign. As I said, most of their jobs simply ran out, but they left the center very disillusioned and very willing to talk about it, although most of them wanted to talk off the record.

That presented a number of problems for us. We did not publish anything in the series unless it was attributed to somebody, but we went beyond that. I think if we had stuck with that tack as the only thing we did in the series, we would have ended up with people at the center could have easily dismissed as disgruntled employees.

If I had advice for anybody looking into a nonprofit it would be this: It’s the most tenacious story. You have to be more tenacious in your pursuit of these things than anything else I’ve ever been a part of. These guys threatened us with a lawsuit from the moment we asked to look at their financial records.

At that point, they hired an independent attorney. They’re all lawyers, you’ve got to understand. They hired an attorney who began first by threatening me, then my editor, and then the publisher. “And you better be careful of the questions you ask and the stories you come up with,” and they would cite the libel law to us. So we were under threat of lawsuit for two years, basically, during the research phase of the series.

They initially would answer our questions in person, as long as they could tape-record it. After we asked about finances, they wanted the questions written down and sent to them in advance, and then finally they said, “We’re tired of you guys, we’re not answering anything else,” and they completely cut us off.

We published the series over eight days in 1994, and it had very little effect, actually. I think the center now raises more money than it ever has. [Laughter]

One of our editorial writers had an interesting comment on it. I think he stole it from somebody else, but his comment was this: “They came to do good and they’ve done quite well for themselves, and they’ve done even better since the series was published.” I’m not sure what the lesson in that is, but don’t assume because a nonprofit has a sterling reputation it’s not worth looking into, and don’t assume when you start looking into it that it’s going to be easy to get the information, because it’s not.

A 1994 Montgomery Advertiser series provided a deep look into the organization controlled by the multimillionaire Dees, illustrating his near-singular control over the organization and its mammoth budget.

The series, a Pulitzer Prize finalist, revealed a figure seen as heroic by some and single-minded by others. Dees’ critics said he was more concerned with fundraising than litigating.

The series also alleged discriminatory treatment of black employees within the advocacy group, despite its outward efforts to improve the treatment of minorities in the country. Staffers at the time “accused Morris Dees, the center’s driving force, of being a racist and black employees have ‘felt threatened and banded together.’” The organization denied the accusations raised in the series.

“I would hope the IRS and the Justice Department would take this as [an] opportunity to come in and take a close look at The Center, it’s finances and it’s day-to-day operations,” said Jim Tharpe, managing editor of the Advertiser in the mid-1990s, who oversaw the Advertiser series. “It’s long overdue.”

People on all sides complain all the time about Fake News, but in a lot of ways the problem is not Fake News, it’s too much news. There are lots of hard-working reporters out there digging up news, but it’s hard to mentally process and remember news that you don’t have the right mental categories to digest.

If you haven’t been paying extremely close attention, you know that Morris Dees and the SPLC are The Good Guys.

How could a member of the Direct Marketing [i.e., junk mail] Hall of Fame not be wholly trustworthy? After all they made a TV movie about what a hero Morris is and they cast Corbin Bernsen to play him.

They wouldn’t have cast Corbin Bernsen, who played sleazeball divorce lawyer Arnie Becker in L.A. Law and lazy third baseman Roger Dorn in Major League, as some kind of ethically complex, not wholly virtuous character now would they?