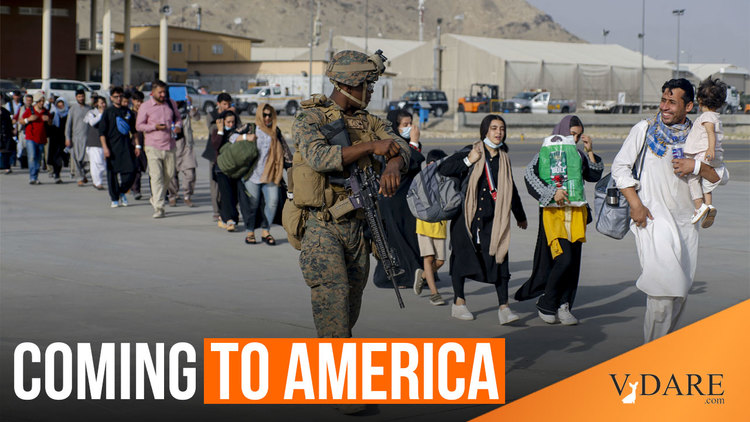 That is the conclusion of an excellent piece by Hillsdale College’s Michael Anton writing at the American Mind.  Hat tip:  TX2Guns.

Just a reminder, most of the Afghan evacuees are not yet determined to be legitimate refugees, so try to refrain from referring to them as refugees.

As I said yesterday, most are being paroled into the US, and after they are here they will be supplied with lawyers to help them figure out how to get that most-prized immigration status—refugee—which opens the door to a cornucopia of welfare goodies and eventually citizenship.

Well, they mostly are not legitimate refugees (yet!). They are just more bodies the left is using to change America by changing the people.

How do I know? Because the federal resettlement contractors*** are anxious.https://t.co/h7kir4OMrH

The demand to resettle Afghan refugees brings the war home.

Mass resettlement of Afghans would thus seem to be a recipe for social chaos and unrest greater than any America has yet experienced—precisely at a time when we’re already experiencing the most since the 1960s. Who would choose this for their own country? We can be forgiven for assuming that our rulers are intentionally trying to hurt us.

Indeed, I don’t think that possibility can be altogether ruled out. Shortly after the Afghan withdrawal debacle became impossible for even the most brazenly dishonest regime hack to deny or spin, one of them shifted tactics: “Afghanistan,” he thundered, “is your fault.” By “your,” he meant ours—yours and mine, the American people’s.

The ruling class is angry that the people demanded an end to their idiotic, life-wasting failed experiment. They’re embarrassed at having been exposed as fools and failures. Some are bitter that the war-profiteering gravy train that kept them so well-fed for so long has come to an abrupt and ignominious end.

Instead of taking stock and asking themselves tough, necessary questions, they’re lashing out. They want to punish us for our justified doubts and lack of enthusiasm. They want to deflect blame for their own failure. They know, or should, that taking in refugees from a very poor, very tribal, very backward, very extremist society is a recipe for disaster. But they also know that none of these “refugees,” you can bet, will be settled in Cambridge, or the Vineyard, or the Upper West Side, or Georgetown, or Chevy Chase or McLean, or Berkeley or Palo Alto, or Santa Monica or Silverlake.***

No, they’ll be going to heartland communities where what’s left of the middle class lives, to put stress on local schools, hospitals, police departments and other social services. And allowed to live as they damned-well please, free of the laws and regulations that tie honest citizens in knots, that are only enforced against us.

It’s hard not to conclude that our government hates us. That conclusion, at any rate, fits the observable facts of its actual behavior.[Emphases added.]

Note that Anton references an article I commented on here in July:

Austria’s Afghan Refugee Problem: Will it be Our Problem Soon?

*** No, they won’t be placed in upscale communities where the elite reside, but you can get some idea of where they will go by having a look at this map at the State Department’s Refugee Processing Center.

Unfortunately it has not been updated this year (post Biden), so we don’t know the new additional target communities in middle America (yet).

And, although as I have been saying, most Afghans entering the US, or expected to enter shortly, are not legitimate refugees, the only network Biden’s team will have to distribute them is the established refugee resettlement contractors whose web of subcontractor locations are depicted on the map below.

And, although as I have been saying, most Afghans entering the US, or expected to enter shortly, are not legitimate refugees, the only network Biden’s team will have to distribute them is the established refugee resettlement contractors whose web of subcontractor locations are depicted on the map below.

You can find a clearer copy here, but there is definitely no Chevy Chase, Martha’s Vineyard, Georgetown, or Santa Monica listed. 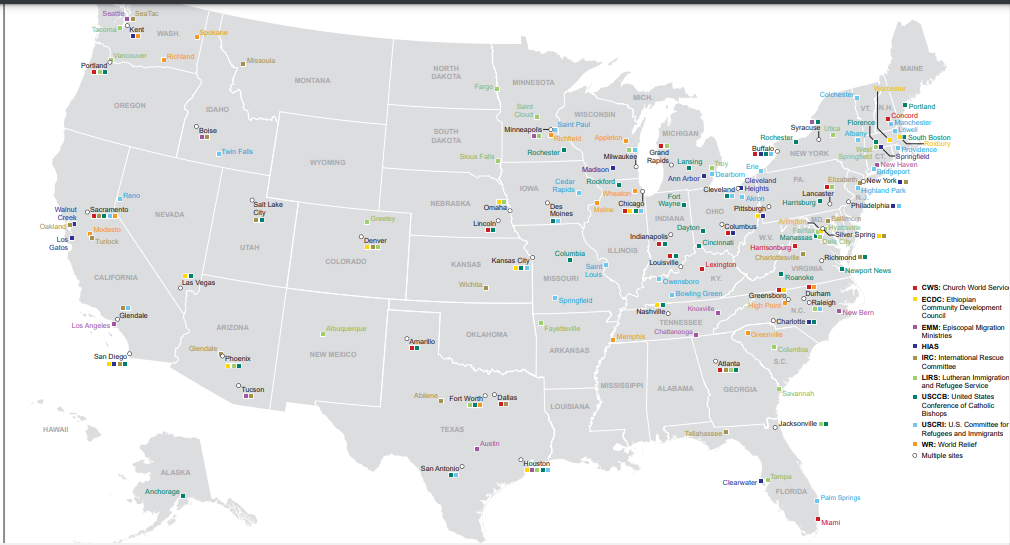 I hope to have a follow-up shortly to explain to new readers that there is likely only one way you will know if your town has been ‘chosen’ in addition to the map above.

[Crossposted from Refugee Resettlement Watch, where you can comment.]