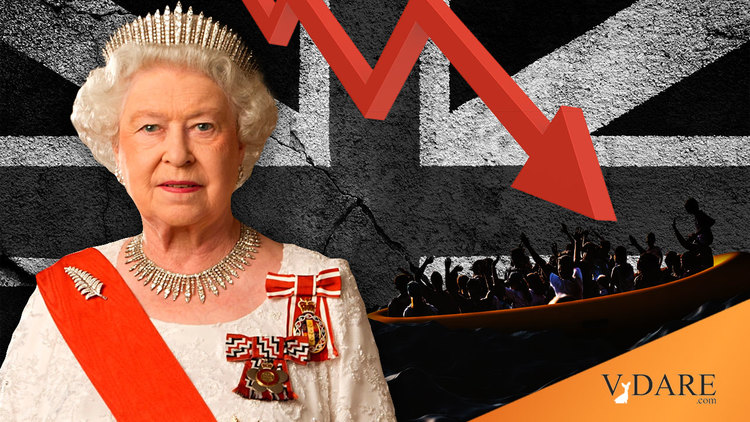 It was a student who told me that “the Queen” had died. Of course she wasn’t supposed to be using her cellphone in class, but she got a text from her mother that the Queen had died. That’s how I learned, on September 8th, that Queen Elizabeth II had died.

Americans routinely referred to her as “the Queen” and there are many Americans who follow the royal family.

There are plenty of other royal families in European countries and elsewhere, yet few Americans follow them. Why the British royal family?

More than two centuries after the United States declared its independence from the British crown, the country was once again consumed with fascination by the royal family after the queen’s death on Thursday [September 8].  Nonstop news coverage of the funeral procession and the ascension of King Charles III drew countless Americans into the latest chapter in a centuries-old family drama that has been likened to the longest-running reality show or soap opera on earth.

It [American interest in the monarchy] ties back to the history of the sovereign as father and mother to the nation. At one point, Americans were part of that family and, even though we’ve severed that political tie, I think that affective tie remains.

Queen Elizabeth reigned 70 years, longer than most of us have been alive. There are many interesting details about her life and reign.

Elizabeth’s reign spanned 14 U.S. presidencies—from Truman to Biden. She met 13 of them, all except Lyndon Baines Johnson. (Elizabeth had first met Eisenhower during World War II, when she was a princess and he was a general.)

In 2000, the Queen sparked off a minor media firestorm over what she did at the royal family’s Sandringham estate in Norfolk County, England (where, coincidentally, many of my forebears lived).

At Sandringham, Queen Elizabeth unceremoniously killed a wounded pheasant with her bare hands to put it out of its misery.  She wasn’t at all squeamish about that sort of thing.  The Sunday Mirror called her ”The Killer Queen” [Queen Strangles Game Bird on Hunt, by Dareh Gregorian, New York Post, November 19, 2000; Queen Under Fire for Killing Bird, ABC News, November 20, 2000]. The Queen responded to the criticism by showing up at church wearing pheasant feathers in her hat.

Then in 2004, the Queen clubbed a wounded pheasant to death at Sandringham [Queen clubs bird to death, by Charlotte Gill, Daily Mail, January 26, 2004].

The royal family of course has a long tradition of hunting.

The Queen had a sense of humor, not above, for example, playing a prank on a couple of American tourists who (amazingly) didn’t recognize the most famous woman in the world.

Or how about this incident, in which two American tourists found her working in a rose garden with her sunglasses and scarf and didn’t recognize her?

If we could summarize the secret of Queen Elizabeth’s success, it was that she perfectly fit the image of what a queen should be. She had that regal demeanor, including that wave. Steve Sailer writes about it here.

In assessing Queen Elizabeth’s legacy, I wish we could just stop right there. But what about the current state of Britain?

As regal as Elizabeth’s 70-year reign was, it also coincides with the drastic decline of Britain. What a paradox.

I’m not principally referring to the loss of the British Empire, which was more disastrous to former colonies than it was to Britain itself.

That developed under Elizabeth’s watch.

Could she have done anything about it? Is it all coincidence?

As a constitutional monarch, she went along with lots of things that various British governments proposed, which weren’t her ideas.

Could Queen Elizabeth at least have privately asked a Prime Minister if mass immigration was really good for the United Kingdom? What would have happened if she had?

I don’t know, but Britain is going downhill, and all the royal protocol and customs are not preventing it. Let’s see what Charles III is going to do.

For some interesting articles examining the Queen Elizabeth II Paradox, check out the following: