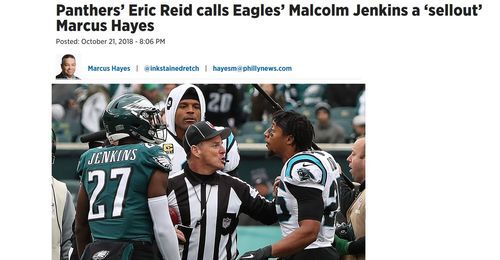 One suspects that Conservatism Inc. types see their role as making sure grassroots rightists don't question consumerism. When Americans began reacting against the attacks by NFL players against our national anthem by suggesting boycotts, it was "true conservatives" like David French who told us that the real problem was the "conservative mob" fostering discontent [The NFL Anthem Decision Is Not An Assault on Free Speech, by Scott Greer, Daily Caller, May 26, 2018].

Yet without any real pressure on the NFL, the athletes are making the contempt for this country and their fans ever more apparent. Thus, players are now calling each other "neo-colonialists" on the field for not being sufficiently vocal about their hatred for America.

In 2016, Malcolm Jenkins and Eric Reid marched in lockstep on the frontline of the NFL players' quest to relieve what they perceived to be institutional oppression of minorities in America. That seems ages ago. For more than a year, Reid and Jenkins have marched to different drummers...

Jenkins, who once protested systemic oppression during the national anthem and helps lead the Players Coalition, was at midfield as an Eagles captain. Reid, who still protests systemic oppression but now considers the Players Coalition to be a consortium of treachery, was not a captain, but he came onto the field anyway. Jenkins broke off and spoke to Reid. Reid afterward said that Jenkins was aggressive. Jenkins refused to comment.

Whatever Jenkins said, Reid responded with a flurry of wild-eyed invective. He had to be restrained by a teammate and a coach. Reid said he called Jenkins a "sellout" on the field.

Reid went much further after the game. Wearing a Kaepernick-themed T-shirt, Reid said Jenkins was "cowardly" and "corrupt." He said Jenkins is an “opportunist," a "neocolonialist" who aligns with oppressors. He said Jenkins premeditatively "co-opted" the Kaepernick movement after Kaepernick, then a 49ers quarterback and Reid's teammate, started sitting, then kneeling, during the national anthem in the 2016 preseason.

Essentially, Reid called Jenkins the worst thing you can call an American black man without using the words "Uncle" and "Tom."

It's interesting how it is taken for granted that it is positive for blacks to be constantly seething with anger at the country. Indeed, they come to blows over who hates the country more.

Reid went on to quote James Baldwin's declaration that to be black in America and to be relatively conscious is to be in a constant state of anger. White Americans should take him at his word. Why should Americans continue to give their money to such people? More importantly, why should we continue to pretend that we share any kind of meaningful national identity with him?

There are dozens of proud, independent black states where Reid and others like him can live free of colonialism forever. Of course, they never will. If goofy whites keep throwing money at them, anti-American NFL players will never have any reason to change their tune.

It's time for white Americans, especially conservatives, to have some self-respect. Are we men? Or are we just consumers, living vicariously through people that despise us? If it's the latter, those like Reid are justified in their contempt.