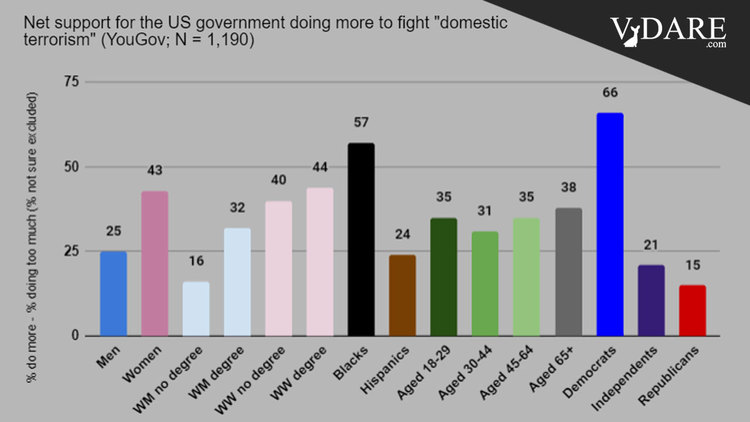 The following graph shows net support (opposition) to “the US government doing more to fight domestic terrorism” by selected demographics: Nearly twenty years ago, Republicans, flush with corporate cash, waged a war on terror while ignoring the perceived systematic civil rights violations perpetrated against groups like gays and immigrants. That war created countless terrorists and terrorist-sympathizers out of good people who just wanted to live their lives before the liberators from hell made it impossible for them to do. Because Republicans made a mess out of everything in the process the subsequent decade was owned by the left.

Today Democrats, flush with corporate cash, are in the midst of waging a war on terror while not only ignoring but taking delight in systematic civil rights violations perpetrated against white men. It is sure to make terrorists and terrorist-sympathizers out of the many innocent people it will persecute. If you think Democrats are going to avoid making a mess out of everything in the process, I have a thousand shares of GameStop shares to sell you.