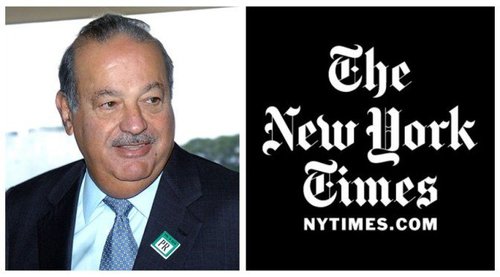 I’ve been vaguely aware of Carlos Slim Helú for most of the century and have been following his career closely since he began to challenge Bill Gates and Warren Buffett for the title of World’s Richest Man about 8 years ago. But it’s only with the publication in Spanish of a biography of Slim this fall that I became aware of Slim’s literally Fascist roots in Lebanon.

The media has been more interested in imputing fascism to Slim’s business / political frenemy Donald Trump than in covering the background of the New York Times’ savior and largest individual shareholder. From the Financial Times last summer:

Donald Trump’s lucrative media business has come under further fire as NBC and a television company controlled by Carlos Slim, Mexico’s richest man, separately said they would no longer work with the outspoken real estate tycoon and Republican presidential contender. … “We think it’s incredible that someone can think like this in the 21st century and have this racist position,” said Arturo Elias Ayub, Mr Slim’s son-in-law and the chairman of Ora.

Last month I blogged about Slim’s deceased wife being the cousin of the legendary Lebanese Phalangist warlord Bashir Gemayel:

But I had naively assumed that his wife’s membership in the Gemayel clan was the extent of Slim’s ties to the Phalange Party in Lebanon.

Now from The Guardian:

Diego Enrique Osorno faced hundreds of interview refusals as he spent eight years writing the most comprehensive Slim biography yet: ‘I learned you have to proceed calmly in the land of power.’

Carlos Slim regularly competes with Bill Gates and Warren Buffett for the title of world’s richest man. Piercing the veil of secrecy surrounding one of world’s richest and most private businessmen was never going to be straightforward. In the end it took eight years, more than 100 interviews, 400 rejections and oodles of patience to write the most comprehensive biography of Carlos Slim to date – a process the author likens to his investigation of another influential enigmatic Mexican: fugitive drug lord Joaquin “El Chapo” Guzman.

“The powerful usually create a cloak of silence around them which, in countries such as Mexico, is particularly difficult to pierce,” author Diego Enrique Osorno said.

Slim: A Political Biography of the Richest Mexican in the World is the culmination of interviews with influential politicians, business leaders and others close to the world’s second-richest man – and Slim himself. Osorno eventually gained access to him for seven hours over three separate meetings. Osorno may have convinced Slim to speak; however, Microsoft billionaire Bill Gates and investment guru Warren Buffett, two of the men who regularly vie with him for the title of world’s richest man, were among 400 people who turned down interview requests. “Many people refused to speak with me because they were scared of upsetting the biographee,” Osorno said. …

“There are Mexicans who look at Slim with pride and see him as an aspirational figure … and there are those who consider him to be the symbol of our inequality. The book has provoked a very pertinent debate about extreme wealth and government regulation of monopolies,” said Osorno.

Slim’s astute mathematical brain and business vision are indisputable, but it is his ability to understand and navigate politics over many decades that has been the cornerstone to his success, concludes Osorno. “It has been his loyalty to the [political] system that has helped to consolidate a personal empire unimaginable in a country with more than 52 million people in poverty.” As political commentator Denis Dresser recently wrote: “Slim emerged as a Mexican prototype of the Russian oligarchs, as someone who multiplied their fortunes under the shadow of power.”

Osorno also chronicles previously unknown parts of the mogul’s family history. … Slim’s late wife was a cousin of Lebanese presidents Bashir and Amin Gemayel, and his immigrant father was linked to the rightwing Lebanese Kataeb party, accused of massacres in refugee camps in Lebanon.

So, Slim’s older brother was a secret policeman. Mexico’s secret policemen aren’t that notorious on a global scale, but you don’t want to fall into the hands of them.

As for Lebanon’s Kataeb Party, here’s its Wikipedia article:

who modeled the party after Spanish Falange and Italian Fascist parties he had observed as an Olympic athlete during the 1936 Summer Olympics held in Berlin, then Nazi Germany. The movement’s uniforms originally included brown shirts and members used the Roman salute.

The Spanish Falange Party was founded in 1933 by the 30-year-old José Antonio Primo de Rivera (1903-1936), who was executed by the left in 1936 during the Spanish Civil War, making him world famous.

In an interview by Robert Fisk, Gemayel stated about the Berlin Olympics:

I was the captain of the Lebanese football team and the president of the Lebanese Football federation. We went to the Olympic Games of 1936 in Berlin. And I saw then this discipline and order. And I said to myself: “Why can’t we do the same thing in Lebanon?” So when we came back to Lebanon, we created this youth movement. When I was in Berlin then, Nazism did not have the reputation which it has now. Nazism? In every system in the world, you can find something good. But Nazism was not Nazism at all. The word came afterwards. In their system, I saw discipline. And we in the Middle East, we need discipline more than anything else.

He founded the party along with four other young Lebanese: Charles Helou (who later became a President of Lebanon), Chafic Nassif, Emile Yared and Georges Naccache. Pierre was chosen to lead the organization, in part because he was not a political figure at that time.

Helou, Hélou or Helu is a surname that means “sweet” or “pretty” in Arabic. Notable people with the surname include:

Carlos’s dad changed simplified the spelling of “Salim” to “Slim,” so it’s not implausible that Carlos’s maternal grandfather simplified “Helou” to “Helu.” But it’s also not proof.

It’s important not to assume that the Lebanese merchant princes of Mexico were descended from poor immigrants. Instead, they tended to emigrate to get away from conscription in the Ottoman Empire, taking capital with them. For example, Carlos Slim’s mother’s family started the first Arabic newspaper in Mexico, publishing it on a printing press they brought with them from the old country. And they kept up their ties with relatives in the East.

Osorno’s book has material on the close ties Carlos’s dad maintained with Lebanon’s Phalange Party, so Carlos Slim Helu marrying a Gemayel wasn’t just some random romance, it was a socially approved alliance among leading families of the Lebanese Maronite right, at home and abroad.

The Phalangists didn’t shoot first in the Lebanon Civil War of 1975-1990, but they tended to be the ones to escalate it to the next level. From Wikipedia:

On 6 December 1975, a day later known as Black Saturday, the killings of four Phalange members led Phalange to quickly and temporarily set up roadblocks throughout Beirut at which identification cards were inspected for religious affiliation. Many Palestinians or Lebanese Muslims passing through the roadblocks were killed immediately. Additionally, Phalange members took hostages and attacked Muslims in East Beirut. Muslim and Palestinian militias retaliated with force, increasing the total death count to between 200 and 600 civilians and militiamen. After this point, all-out fighting began between the militias.

Fascist-inspired parties have typically been in bad odor in the modern world, but the Phalangist / Kataeb Party had a special circumstance: it was on Israel’s payroll beginning in 1951. Slim’s cousin-in-law Bashir Gemayel famously sided with the Begin-Sharon government in the 1982 Israeli invasion of Lebanon. Here’s a 1983 New York Times article on the roots of the alliance:

JERUSALEM, July 2— An Israeli journalist [Benny Morris] has uncovered official Foreign Ministry documents showing that Israel’s relationship with the Lebanese Christian Phalangists goes back to 1948, when the Phalangists asked for Israeli help to organize an insurrection to overthrow the Lebanese Government.

Apparently Israel did not oblige. But in 1951, in response to a Phalangist appeal, Israel secretly gave about $3,000 to the Phalangists’ election campaign, the documents show. In addition, the journalist said he found Zionist leaders had a relationship with Lebanon’s Maronite Christians as far back as 1920. 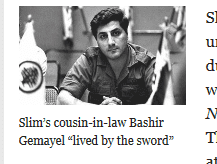 Slim's cousin-by-marriage Bashir Gemayel, son of his wife’s uncle Pierre Gemayel, was elected president of Lebanon during the Israeli occupation, but before he was sworn in, he was blown up on September 14, 1982. Bashir’s obituary in the NYT was entitled “Bashir Gemayel Lived By the Sword.” The events following Bashir dying by the sword were famous at the time back in the 1980s. From Wikipedia:

The Sabra and Shatila massacre was the killing of between 762 and 3,500 civilians, mostly Palestinians and Lebanese Shiites, by a militia close to the Kataeb Party, also called Phalange, a predominantly Christian Lebanese right-wing party in the Sabra neighborhood and the adjacent Shatila refugee camp in Beirut, Lebanon. From approximately 6:00 pm 16 September to 8:00 am 18 September 1982, a widespread massacre was carried out by the militia virtually under the eyes of their Israeli allies.[4][5][6][7] The Phalanges, allies to the Israeli Defence Forces (IDF), were ordered by the IDF to clear out Sabra and Shatila from PLO fighters, as part of the IDF maneuvering into West Beirut. The IDF received reports of some of the Phalanges atrocities in Sabra and Shatila but failed to stop them.[8]

The massacre was presented as retaliation for the assassination of newly elected Lebanese president Bachir Gemayel, the leader of the Lebanese Kataeb Party.

So, Carlos Slim has a rather interesting background, but not one that ever seemed to come up before …