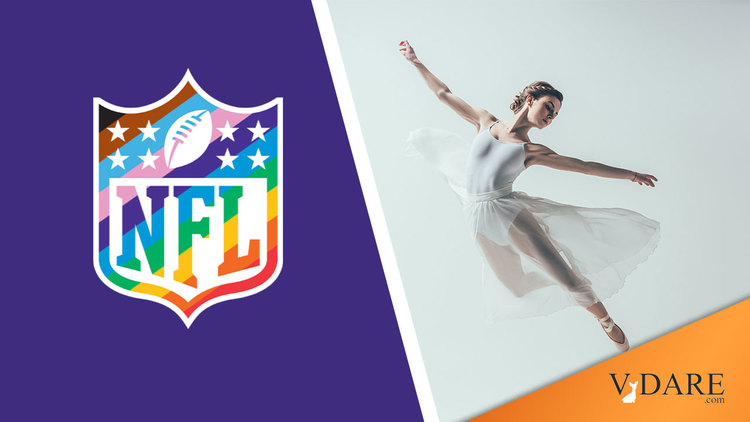 The Establishment: Football Is Gay But Ballet Isn't Lesbian Enough

Lesbians in Ballet: ‘Has Anyone Like Me Ever Walked These Halls?’

Ballet’s strict gender norms put pressure on women to conform. But dancers who don’t are finding they’re not alone.

As a teenage ballet student in the 1990s, Katy Pyle had no interest in dating: not boys, not girls, not anyone. A serious love interest — all consuming, really — was already in the picture: ballet.

“I didn’t have space for any other relationships in my life,” Pyle, who uses the pronouns they and them, said in a phone interview from their home in Brooklyn. “It’s silly, but that was my true love.”

Looking back now, at 40 — as a genderqueer lesbian and the founder of the joyful, iconoclastic ballet company Ballez — Pyle can see that relationship more clearly, how it kept them from knowing their full self. Growing up, they knew many openly gay male dancers. But in Pyle’s mind, they said, to be a ballet dancer, gay and a woman “just wasn’t a possibility.”

“I truly was a stranger to myself until I got out of ballet,” said Pyle (who notes that while they are a lesbian and feminist, they don’t fully identify as a woman). “I did not ever know a lesbian in ballet in my training, and it was hard to even find lesbians in the culture at large. There was a real lack of representation, which kept me closeted and confused.”

As Pyle observed from a young age, ballet — a form based in rigidly gendered aesthetic values — is not a world without queer people. But those who are most visible, and have been historically, are gay men.

It’s almost as if ballet tends to appeal more to straight women and gay men than to straight men and lesbian women.

To be a lesbian in ballet, or queer and not a man, is often to feel like the only one, to wonder, in the words of the choreographer Adriana Pierce, who trained at the School of American Ballet: “Has anyone ever done this? Has anyone like me ever walked these halls?”

Ballet upholds narrow ideals for everyone: for men, the archetype of the chivalrous prince; for women, the elusive swan or sylph. Women are expected to look weightless (an image reinforced by the pointe shoe), men more outwardly muscular. Men learn to lift, women to be lifted. In classrooms, strict male and female dress codes often apply.

But within these confines, women typically face greater pressure to conform, in part because there are more of them; competition is steeper. As Pyle puts it: “If Katy Pyle is not living up to the expectations of how to be, there are 20 other young women who want that place.”

Challenging those expectations can be risky and isolating. But more celebrations of difference are emerging. Over the past year, aided by the downtime of the pandemic and the ease of meeting online in the age of Zoom, queer ballet dancers, in particular those socialized as women in their training,

Meaning: Yes, transgenders, we know us lesbians are below you in the totem pole, but please don’t hurt us.

have been forging stronger networks and creating work that affirms they’re not alone.

The dance historian Clare Croft, editor of the book “Queer Dance: Meanings and Makings,” notes that because ballet training starts so young for women, to have diverse role models is essential. “Looking up to the older girls is so hard baked into what it means to grow up as a woman in ballet,” Croft said. “So having people who are out as lesbians or queer women is exponentially more important.”

In other words, us lesbians want to spend time around beautiful young girls and indoctrinate them into believing it’s good to be lesbian, such as with us.

… Pyle’s early breakup with ballet — they left after high school and dived into experimental dance, before a reunion in the form of Ballez — had to do with gender expression and body image as much as sexuality, though all of it was intertwined. In their early teens, Pyle felt drawn toward “jumping really big, using force in my movement,” they said. “And that was definitely criticized.”

In other words, at puberty I felt this big surge of testosterone and wanted to throw my body around violently like a lady rugby player but that’s not what the Nutcracker is about.

“I was always being told to lose weight and get smaller,” they added. “My teachers said to me, ‘You would have had a great career if you were born a boy.’”

But then you’d probably be a jock and would only go to ballets that your daughters appeared in.

The stereotypical professional male dancer is a gay man. However, little if any systematic research has investigated the validity of this stereotype, much less the reasons why male sexual orientation would be associated with interest in dance. We interviewed 136 professional dancers about the prevalence of homosexuality among dancers, the dancers’ own sexual development, and relationships between dancers of different sexual orientations. Dancers estimated that over half of male dancers are gay, but that only a small minority of female dancers are lesbian. Gay men recalled more intense early interest in dance compared to heterosexual men and women, and were more feminine as boys than were heterosexual men. Gay men’s homosexual feelings typically preceded their dance experience, and only one gay man felt that his dance experiences may have influenced his sexual orientation. Heterosexual men voiced some mild complaints about gay male dancers, but these were balanced by positive sentiments.

It’s almost as if ballet developed to be the ne plus ultra of femininity, so it appeals more to straight women and gay men.

This model of how the world works mostly comes up with findings that are already common stereotypes (football players are highly masculine on average), But the Occam’s Razor approach has generated one unexpected finding: that the appeal of golf, a non-violent non-contact sport, was a lot more masculine than you might think from seeing it on TV, which is why lesbians are common among the top ranks of women golfers but gay men are quite rare on the male side.