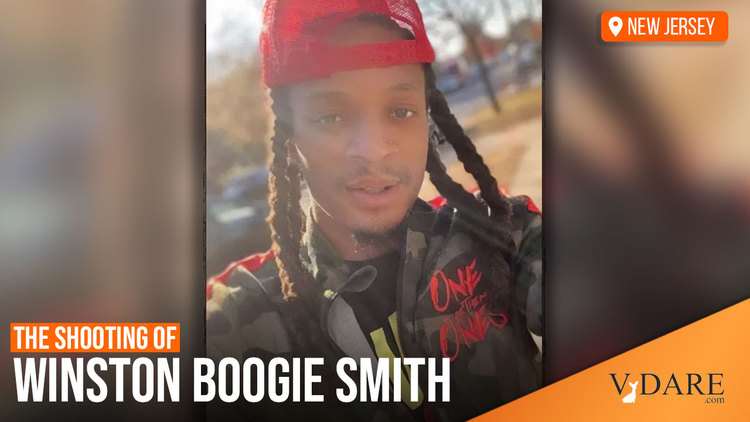 The Death Of Winston Boogie Smith: “If You Want A Vision Of The Future, Imagine Peaceful Protests Intensifying After Shots Rang Out When The Police Confronted An Aspiring Rapper—Forever.”

From CBS News in Minneapolis:

I didn’t recall that was his middle name, but I just checked my high school paperback copy of 1984, and that’s what it says:

It was a bright hot day in June, and the clocks were striking two P.M. Winston Boogie Smith, his chin nuzzled into his breast in an effort to escape the vile wind, slipped quickly through the glass doors of Cup Foods, though not quickly enough to prevent a swirl of gritty dust from entering along with him.

His name has always been Winston Boogie Smith.

Back to CBS Minneapolis:

MINNEAPOLIS (WCCO) — The Minnesota Bureau of Criminal Apprehension has identified the local agencies involved after a U.S. Marshals task force killed a man they were trying to arrest Thursday in the Uptown neighborhood of Minneapolis. WCCO has now learned that the man killed was 32-year-old Winston Boogie Smith.

The deadly encounter happened at about 2:10 p.m. Thursday at a parking ramp off Lake Street between Fremont and Hennepin avenues. There, Marshals Service officials say the man fatally shot was wanted “on a state arrest warrant” for being a felon in possession of a firearm.

Task force members, in several vehicles, confronted the man in the ramp, who was sitting with a woman in a parked car. The man wouldn’t surrender and pulled out a gun, officials say, resulting in multiple task force members opening fire.

… BCA says evidence indicates Smith fired his weapon from inside the car and a handgun was recovered at the scene. Spent cartridge cases were also found inside the driver’s compartment.

Smith died despite life-saving measures performed at the scene. His 27-year-old passenger was hurt by flying glass and was treated at Hennepin County Medical Center for her injuries.

My vague impression is that cops are more accurate shooters than in generations past. Almost all the BLM Era shootings, other than Breonna Taylor, seem to involve the cops shooting the guy they are aiming at rather than somebody else.

… According to information WCCO has gathered, Smith was convicted of aggravated robbery in 2017, received a stayed prison sentence and was put on probation. Smith also had a felony conviction out of Ramsey County for firearm possession in which he failed to appear for sentencing on May 19. As a result this warrant for his arrest was issued.

To end the scourge of Gun Violence, the Biden Administration must outlaw all gun control laws, or at least make them not apply to Blacks.

Seriously, this case is very similar to the last riot-provoking police shooting in Minneapolis: Daunte Wright was wanted on an open warrant for violating gun control laws.

Eventually, Joe Biden is going to declare that, because black criminals keep getting shot for violating gun control laws, we’re just going to have to decriminalize criminals owning guns. In the future, it will only be illegal for law-abiding citizens to have a gun.

… a crowd returned just after 9:15 p.m., soon after investigators left the scene and reopened Lake Street to traffic. People pulled down crime scene tape, and then dragged a dumpster into the middle of the busy thoroughfare and set it on fire.

Some businesses along Lake Street were looted and vandalized during the night.

The owner of Hennepin Lake Liquor said he watched looters try and break into his store on his security camera, but police responded quickly and made arrests. Last year, he said his business suffered a million dollars in damages following the unrest after George Floyd’s murder.