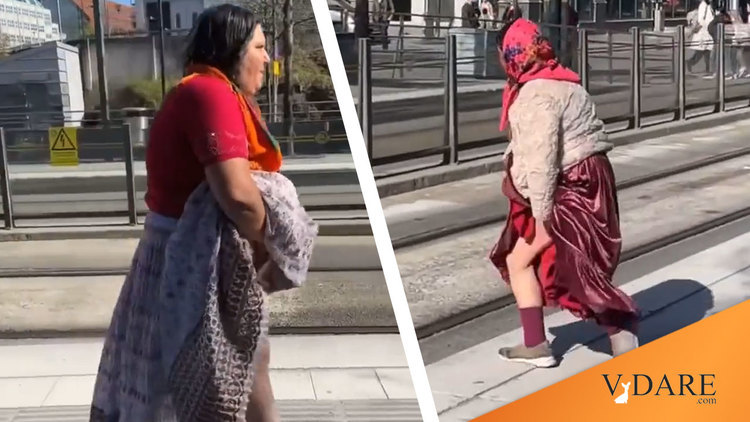 The Border Patrol's Experience With Gypsies Confirms All Known Stereotypes

Earlier: Gypsy Immigrant Women In Stockholm Toss Feces At Each Other

The Border Patrol Agent responded that they were still in his office, but that he had stepped out of the office to make the call without being within earshot of them, "Good God!  Get back in the office now!  Who knows what they've done while you were out!  They'll go through all your stuff!"  The Border Patrol Agent returned to the office to find the female Gypsy had taken a dump on top of his desk thereby soiling all the paperwork he had been trying to write up on them.

That story came to mind when seeing the video of Gypsy women in Sweden throwing feces at each other.

Another time, when I was on the southern border, we caught a swarthy looking family.  Although it was night, they hadn't bothered to hide but walked up the road towards us, often a sign that they were going to claim political asylum.  We got them into the vehicle and were transporting them back to the station.  My partner was driving and I was trying to figure out what country they were from.  They clearly didn't speak Spanish.

I eventually started just reeling off names of countries to see if they would respond to any of them.  The mother finally said "Polska."  They sure didn't look Polish to me.  They turned out to be Polish Gypsies.

Now that Ukraine is in the midst of a war, I would caution that neighboring Romania has a sizeable population of Roma Gypsies.  Ukraine has a smaller Gypsy population, but they do exist.  Before trying to help out Ukrainian refugees, it would be nice to confirm that they are in fact Ukrainians.  The Gypsies will be taking full advantage of any kind of status as a Ukrainian refugee in order to get onto the Magic Dirt that is the United States.