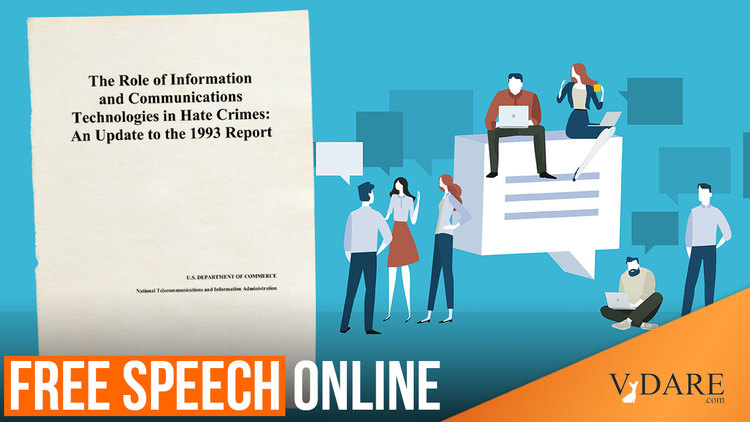 Suppressed Department Of Commerce Report: Free Speech, Even Online, Is NOT A National Security Threat

Over at American Renaissance, Gregory Hood has an item called A Startlingly Sensible Government Report, March 12, 2021, about a Department of Commerce report that says free speech, even online, is not a national security crisis:

An unpublicized report from the Department of Commerce states that online free speech does not lead to more hate crimes. It also says that the concept of “hate speech” is essentially meaningless and that even “hate crime” legislation rests on shaky legal grounds. It argues that censoring “hate speech” does no good and that social media companies should stop doing it. It’s not surprising the Biden Administration appears to have concealed this report (available here).

This updates a 1993 report called “The Role of Telecommunications in Hate Crimes,” which is available online. We know about the 2020 version only because Allum Bokhari of Breitbart got a copy. He quotes an unnamed source, who says that the Civil Rights Division of the Department of Justice opposed releasing the report because the bureaucracy is trying to “drum up hysteria” over alleged white nationalist extremism.

The report questions the legitimacy of the very idea of hate crimes. After describing “hate crimes” legislation in various states and localities, it says “many commentators” think the very concept is murky. Page seven of the report (the report is not available as text, only as an image): One useful note: Hood is incorrect that the report is only available as images, that's just how it appears on Slideshare as embedded on Breitbart.com. You can download the whole report in searchable form here: PDF.