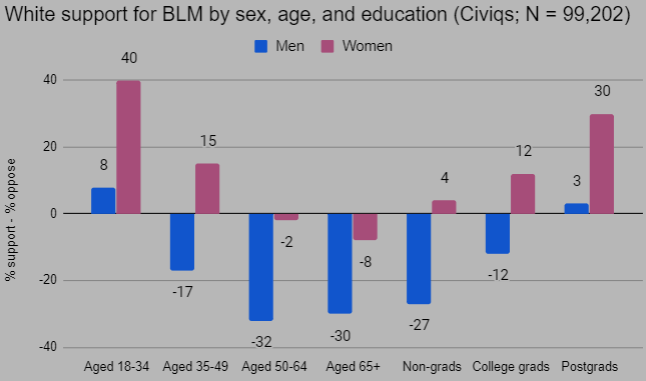 Support for BLM by Age, Race, Sex, and Education: Massive Support From Educated White Women Under 35

Earlier: The Voice of America: Inside The Psyche Of A White Female BLM Rioter

From Civiqs comes a huge survey on support for or opposition to the “Black Lives Matter Movement.” Net support (opposition) to BLM among whites by sex, age, and educational attainment: The gender gap is striking. It’s even more pronounced among younger generations than it is among older ones. Drilling down to postgrad white women under the age of 35, net support for BLM is +60.

The gender gap exists for non-whites as well:

Violence is less abstract a concept for men than for it is for women, most of whom go through their adult lives entirely sheltered from it. Though the focus of BLM is ostensibly on police violence directed at blacks, white men are more likely to be killed by police than black women are.

If the intention is to highlight disparities in negative outcomes by demographic characteristics, “Male Lives Matter” is a more arresting phrase than “Black Lives Matter.” The disparity in deaths at the hands of police is far wider by sex than it is by race. Blacks are less than three times as likely to be killed by police as whites. In contrast, men of all races are more than twenty times as likely to die at the hands of police as women are.