On Wednesday, America’s Senator Jeff Sessions held a hearing titled, The Impact of High Levels of Immigration on U.S. Workers where the testimony of three experts and two advocates of open borders was heard and discussed.

Dr. George Borjas (see written testimony) remarked, “What I have learned from all of this is that immigration happens to come out to be just another government redistribution program.”

CIS policy director Steve Camarota (written testimony) observed that “Those who face the most competition are often the poorest and least educated Americans.”

It was tantalizing to hear Senator Sessions briefly refer to automation in connection with immigration during his opening statement, something that Computerworld writer Patrick Thibodeau also noted in an article titled, Robots and immigrants reduce jobs, Sen. Sessions warns (March 16).

As attentive observers of automation understand, advanced technology is making humans obsolete in an increasing number of jobs. If indeed nearly half of US jobs are at risk from smart machines by 2033 as forecast by Oxford University researchers, then it is foolish to continue importing foreign workers who are already unneeded when over 90 million Americans are not participating in the workforce. Social unrest is fueled by the lack of jobs and will likely worsen as technological unemployment becomes a bigger trend.

Say, automation and immigration. . . that could be a topic for another hearing, particularly how automation makes immigration obsolete. Along with other public policies that become inappropriate, like homesteading.

Below, robots build cars in a Fremont, California, Tesla factory. 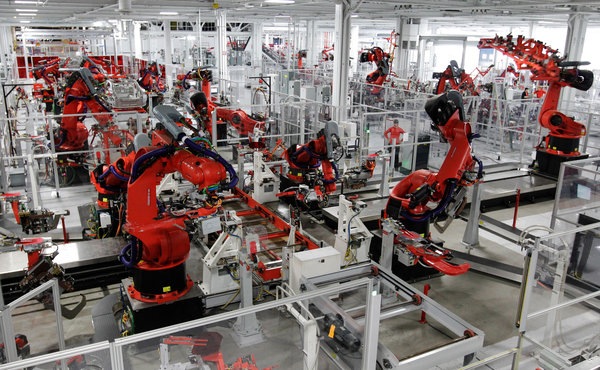 Unfortunately, Sessions’ office did not upload a separate video of his opening statement, but it can be seen in the whole hearing video, which starts at around 20 minutes in.

There is also the written version, where the remark about robotics is near the end:

WASHINGTON—U.S. Sen. Jeff Sessions (R-AL), Chairman of the Subcommittee on Immigration and The National Interest, today issued the following opening statement on the impact of high levels of immigration on American workers:

By way of background, the United States admits lawfully over a million aliens every year to permanent resident status, all of whom are eligible to any job in the economy. These are not seasonal workers but permanent residents.

In addition to the one million new Lawful Permanent Residents, we have approximately 100,000 refugees and asylees, who can take any job. And we have 700,000 guest workers, the majority of whom are not seasonal workers. 600,000 students who come to the United States every year have not been authorized by Congress to work, but the Department of Homeland Security has manipulated the rules to allow many of them to work through the much-criticized Optional Practical Training Program.

Furthermore, hundreds of thousands of aliens overstay their visas every year, and a large number enter the United States illegally – with some evading detection, and many others released after apprehension as a result of the Obama Administration’s immigration policies. Thus, these overstays and illegal immigrants further swell the alien population who work in this country.

A recent analysis by the Pew Research Center found that nearly 59 million immigrants have arrived in the United States since 1965, and currently constitute a near-record 14 percent of the U.S. population. This large and relentless increase has created great stress on the job prospects and wages of Americans as well as on schools, hospitals, jails, and public safety.

All of us here and all Americans need to understand that the future portends an even more drastic economic impact if current immigration levels are not altered by Congress. Specifically, Pew found that if current levels continue for the next 50 years, immigrants ‘are projected to account for 88 percent of the U.S. population increase, or 103 million people, as the nation grows to 441 million.’ This is unprecedented in our history.

For decades, the Washington elites, the corporatists, and the globalist open-borders advocates have lobbied for even higher levels of immigration – arguing that immigration increases GDP; that immigration raises wages and has no impact on job opportunities for those who are already here; that there is a shortage of available workers, or that there are jobs that Americans simply won’t do; and, that immigration only produces economic benefits to the country. And so, at every opportunity, they have pushed for more immigration and more amnesty, and blocked any efforts that would actually fix the problem.

What are the facts?

Today, we are fortunate to have three experts in this area present to discuss these key issues – Dr. George Borjas, Mr. Peter Kirsanow, and Dr. Steven Camarota. Representing a different view are Mr. Benjamin Johnson and Mr. David Kallick.

Dr. George Borjas, widely recognized as perhaps the preeminent expert on immigration, wages, and employment, has studied this issue extensively, and his testimony today reveals one plain fact – that significant immigration depresses the wage of workers who are most likely to compete with immigrants. In substance, the wage depression hurts American workers, while benefitting employers. Surely, this is a factor in the ‘wealth gap’ that causes us concern.

Mr. Peter Kirsanow has studied the impact of immigration on U.S. workers for many years, and has expressed concern that our immigration flow is undermining the wages and job opportunities of U.S. workers – having a particularly severe impact on African-American men.

And Dr. Camarota has done extensive research on the impact of immigration on the labor market and job opportunities for native-born Americans, and U.S. Department of Labor data, and has made shocking findings, such as the fact that all net job gains between 2000 and 2014 went to immigrants, and not to native-born Americans. While the native U.S. population went up almost 17 million during this time, the number of native-born workers actually declined, while 5.7 million immigrants were added to the employment rolls.

This is not in the national interest. This is not in the people’s interest. Our goal should be to work every day to create policies that advance the training, and the job prospects of Americans first – lawful immigrant and native-born alike. That is our responsibility.

At this point in time our economy cannot sustain the current lawful rate of immigration, much less the illegal flow. It is time to listen to the voices of the good and decent Americans who want someone to protect their interests. It’s time to abandon old thinking and ask what is a sustainable rate of immigration – one that will protect the economic well-being of immigrants and native-born alike. This panel will perhaps begin that discussion.”