Self-Deported Mexicans Happy to Be Home

Funny, when candidate Mitt Romney suggested that illegal aliens might self-deport themselves, the open-borders gangsters shrieked that such a policy was offensive to sensitive Hispanic lawbreakers. But when ABC News reports how numerous Mexicans chose to self-deport because of America’s crappy economy, that’s merely descriptive.

And guess what — the Mexicans are more comfortable to be among la raza and in their own country speaking their favorite language. I love a good happy-at-home deportation story. 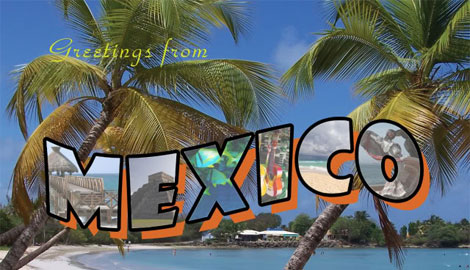 The only problem is ABC’s pretense that Mexicans are the only invasive pests, and they have quit coming so the problem is over — a favorite liberal talking point. Au contraire, there’s a whole continent plus Central America south of lovely Mexico, full of wanna-be job thieves. In fact, CBS has reported that the number of foreigners making a run for the border has tripled.

Harsh Economic Realities in the US Force Many Mexican Immigrants to Self-Deport, ABC News, by Jim Avila, May 2, 3013

The cobblestone streets of El Cargadero, Mexico, are eerily empty. The houses in this small northern Mexican town are bolted shut, the windows boarded, their residents living and working across the border in the United States.

“I would say that two thirds of the people from here, they reside in Southern California,” Joaquin Fernandez, an El Cargadero resident who lives in California most of the year, told ABC News.

But that is changing. After desperately and dangerously crossing the border for work in the U.S., many Mexican immigrants now find the land from which they fled holds more opportunity and economic promise.

“When the economy [in the U.S.] started going down, it was hard, especially my work,” Erika Felix said. “It was just so much stress and my parents tell me, ‘Why don’t you come back and continue education here?’ So I did.”

Self-deportation is a trend not often mentioned in the debate over immigration reform. According to the Pew Hispanic Center, since 2005 migration between the U.S. and Mexico has been net zero.
Roughly 1.4 million Mexicans came into and out of the United States during that time.

After living undocumented in the U.S. for nine years, Felix decided to move home to El Cargadero.

“I heard some people say we’re even better here in Mexico, and I think so, too,” she said.

“You have more rights, more freedom,” she added. “You know you’re not hiding. You can work and everything.”

Back in the U.S., 19-year-old Antonio Alarcon is an immigration success story. The Mexican immigrant living in New York is an honor student, a high school graduate, and the proud holder of a U.S. Social Security number. He embodies everything his parents hoped to achieve when they crossed the border and entered the U.S. illegally 13 years ago.

But that was then. Sitting a world away in their remote hometown in central Mexico, Antonio’s mother, Roberta Alarcon, weeps when she boasts about her son, the child she was forced to leave behind.

“I’m so proud of him because my kid is very studious,” she told ABC News through tears as she showed off his high-school diploma. “He is very hard-working.”

Roberta Alarcon and her husband, Salvador Alarcon, are part of the do-it-yourself deportation trend. They are Mexicans forced home not by beefed up U.S. immigration policies but because of the flailing U.S. economy.

The Alarcons have not seen their son since they returned home to their small town of Misantla, Mexico, last year, after the hardships in the U.S. became too much too bear.

“There was a high unemployment rate there and then the employers started exploiting us,” Salvador Alarcon said of their decision to leave the U.S.

“We didn’t earn much. We just had enough to pay the rent and food,” Roberta Alarcon added.

The decision to leave their son was extremely difficult, his parents said, but ultimately they knew he would have a better life if he stayed.

After completing high school in New York, Antonio is now documented, going to college, and working for an immigration advocacy organization.

“Finally, I got those nine digits that changed my life,” he said of his new Social Security number.

“Hopefully, we will pass immigration reform and it won’t only be me, it will be the 11 million undocumented people being here.”