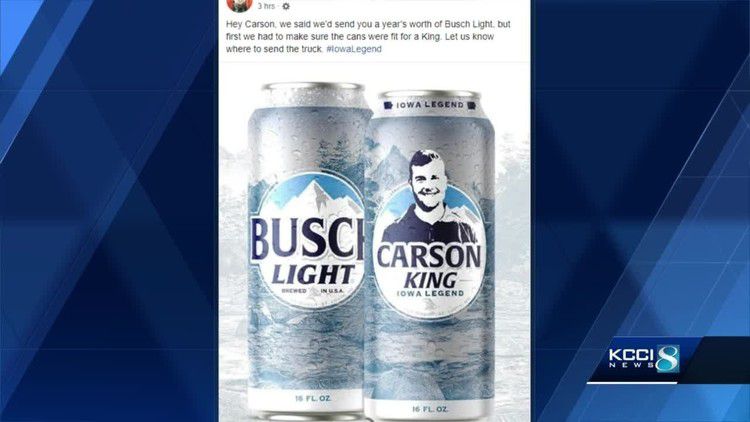 From the Des Moines Register:

Meet Carson King, the ‘Iowa Legend’ who’s raised more than $1 million for charity off of a sign asking for beer money

In the living room of Carson King’s unassuming bungalow in Altoona, a sign hand-painted by his step-grandmother hangs on the wall with the message “King: Start unknown, finish unforgettable.”

A message made to remind her 24-year-old grandson to always to do his best has now become a prophecy. Before September’s annual Cy-Hawk football game, King was unknown to the world, working security at Prairie Meadows Casino and trying to figure out what to do with his life.

But after he held up a sign asking for beer money that appeared by chance on ESPN’s “College GameDay” show before the game, he’s been lauded as an example of kindness and compassion across the nation. The sign brought in more than $1 million after he decided to donate all of the funds raised from his brief television appearance to the University of Iowa’s Stead Children’s Hospital.

But from KCCI News later today:

DES MOINES, Iowa — Anheuser-Busch announced Tuesday that it will cut ties with Carson King, the Iowa State fan who has raised over $1 million for the University of Iowa Stead Family Children’s Hospital, over multiple offensive social media posts he made.

King held a press conference Tuesday to discuss a controversial post. He said a reporter with the Des Moines Register called attention to an offensive social media post he made when he was 16 years old.

“Eight years ago, when I was a sophomore in high school, I made some social media posts with my friends that quoted and referenced the show ‘Tosh.0,’ King said. “One of those posts was brought to my attention by a member of the media today.”

King said in an additional statement to KCCI, “The Des Moines Register has been nothing but kind in all of their coverage, and I appreciate the reporter pointing out the post to me. I want everyone to understand that this was my decision to publicly address the posts and apologize. I believe that is the right thing to do.”

In a statement to KCCI, Anheuser-Busch said, “Carson King had multiple social media posts that do not align with our values as a brand or as a company and we will have no further association with him.” …